Are they really a 4th-6th cousin? 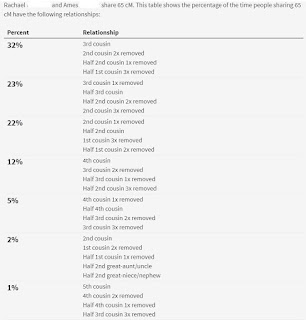 At all DNA companies, matching with other testers includes an estimated relationship (usually a range) based on how much DNA you share. The key word is "estimated". There's plenty of examples of finding relatives whose relationship to you actually winds up being outside the estimated range.

AncestryDNA has the option to click on how much DNA you share (when you're on the match review page - click the little "i" icon if you're on the match list page) where previously, it just gave us generic info about that estimated relationship degree. Now (and this may only be available on the new beta match list), it gives us specific probabilities of each possible relationship based on the exact amount of DNA you share. What I found is that sometimes, even their statistical probabilities don't stick within the estimated relationship range.

Above left is an example. This is with a confirmed 3rd cousin of my mom's, an estimated 4th-6th cousin. Again, it's not unusual that the actual relationship is outside the estimated range, but AncestryDNA's predicted relationship range doesn't even seem to be following their own statistical probabilities. As you can see, 65 cM shared has the highest probability (32%) of being 3rd cousins (or 2C2R, Half 2C1R, or Half 1C3R), which isn't even within their predicted 4th-6th cousin range. No prediction system is going to be perfect (because there's a lot of overlap between different relationships so no estimate will be exact), so I'm not saying anything is wrong with the system, I'm just pointing out that this new statistical probability option will tell you a lot more than the predicted relationship range, so don't overlook it.

These probabilities will especially be great for unknown close relations popping up, or telling the difference between full and half siblings. My grandfather's half niece, for example, has an estimated range of 1st-2nd cousin, but in the probabilities, it lists all the possible relationships, including half niece/nephew at 96% probability. In fact, at the amount of DNA they share, it doesn't even list 2nd cousins in the probabilities, ruling that out completely even though it's a part of the original predicted range.