Yet Another AncestryDNA Ethnicity Update

AncestryDNA had promised another update to their ethnicity report this year, despite there only have been one last year (which was still being rolled out the last people earlier this year too) and it seems to be rolling out already, with little to no beta test like last time.

The reference panel has now jumped up to 40,017 samples, but don't assume that means it's going to be more accurate. As ever, it depends on the individual, and just how admixed you are. Also, unlike last year's update, we're not seeing any new percentage groups in Europe (though I do believe there's new ones in the Americas), just a change to the percentages (though there are some new Genetic Communities).

For me personally, the report just keeps getting worse and worse. They have now removed my Scandinavian results entirely, which is a shame because I did have one Norwegian great grandfather so I should be roughly 12-13% Norwegian. Of course, I may have inherited less than that from this particular great grandparent (and most ethnicity reports do reflect that), but I did inherit something from him (a great grandparent is not distant enough to not inherit anything), so the complete wipe away of any Scandinavian result at all (not even anything in Sweden, let alone Norway) is incredibly inaccurate and a shocking degradation.

Meanwhile, they've increased my French results even more to 21% (was 18%), even though I still don't have any recent French ancestry (I had a few French Huguenot ancestors from back in the 1600s, but we're talking about 2 or 3 out of 1024 or 2048 8th-9th great grandparents - a drop in the water that is generally too diluted to be detectable, and certainly shouldn't be as high as 21%). 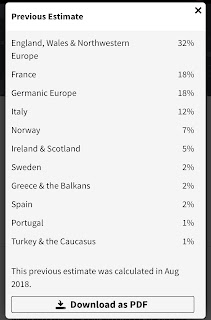 They do appear to have removed a bunch of the low percentages that were likely noise, or coming from neighboring regions. That seems like a plus at first, but since my valid Scandinavian results were among them, it doesn't seem like a great improvement.

My Italy results remained my the same, which might seem like a positive (at least they didn't go down), but they are remaining stubbornly at 12% when I should be about 32% (and this one I know for sure because my paternal grandfather tested and I share 18% with him, leaving me to share 32% with my Southern Italian paternal grandmother). I suppose the rest of my Italian DNA is showing up in France. If you look below, the map for France does cover Northern Italy, but of course I don't have ancestry in Northern Italy, only Southern, and AncestryDNA are the only ones who seemingly can't figure this out (well, they are the only ones trying to give France it's own category apart from LivingDNA which more accurately give me 0% in France).

In addition to these changes, we've also seen a redefinition of the maps. Although the categories haven't changed, they've just altered the maps to better reflect the regions each category is supposed to cover. At the same time, they've taken away the page that included more in depth details and background on each category, which is a major regression if you ask me. We now only have a short paragraph with info on the region and it no longer lists the "secondary" areas that each category covers, even though the maps still include them. 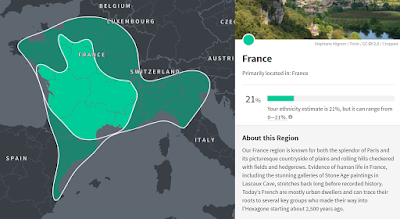 As you can see above, there is no longer a link to click for more information. AncestryDNA keep removing more and more details and information, as though they think we are too stupid to understand it. People are simply now going to have more questions and understand the results even less.

Also note how the map for France still shows the surrounding areas that this category includes, but for some inexplicable reason, AncestryDNA has decided to only include the "Primarily located in" information, which only lists France, and no longer lists the "Also included in" areas shown in the map, like Spain, Italy, etc. That won't be confusing for people at all. 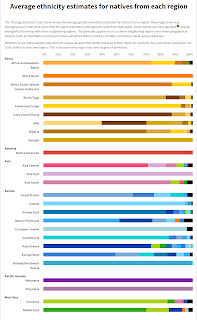 I really don't know what they are thinking sometimes, and since they rarely ever explain or communicate their choices to their customers (apart from "we think this is better"), I doubt we'll get an explanation. We still never even saw the return of the Average Admixture chart (shown left) when it was lost in last years update, which was so useful for understanding what regions shared a lot of DNA with what neighboring areas (God forbid they actually admit that is a thing).

Having said all that, the report does seem to have improved for people who are less mixed, just like last years update. My half Italian dad's results went from 44% Italian (which is reasonably close to half) to exactly 50%. The rest of his results didn't change much, which means he still has too much in England/Wales and not enough in Germanic (only 5% Germanic when he should be more like 30%).

My paternal grandfather's results have evened out a little bit - his tree is roughly half German and half Scots-Irish (maybe some English), and his update says 51% England/Wales, and 31% Germanic, a slight improvement from 67% England/Wales and 23% Germanic.

My husband is the least mixed of all. He is a British native, born and raised, but half Irish. Grouping his ancestry the way AncestryDNA does, he'd be about 40% English and 60% Irish/Scottish. Last year's update gave him 38% England/Wales and 61% Ireland/Scotland with a random noise level of 1% in Benin/Togo. Today's update has him at 43% England/Wales and 56% in Ireland/Scotland. Not much of a change and still pretty consistent with his background, apart from that random 1% they've now put in Nigeria.

As for my mom's results, her previous update from last year saw no results whatsoever in Germanic even though she should be around 20%. Meanwhile, her Norwegian results, which should have been around 25% (that Norwegian great grandfather of mine was her grandfather) were inflated at 40% last year. She now had 10% Germanic, which is better than nothing, and 27% in Norway, which is almost spot on. The only thing a little off is the 14% in Sweden.

How have your results changed? For the better or worse?
Posted by History Chick at 9:44 AM