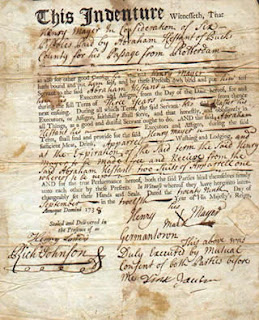 Now and again I see people who bring up "white slavery" in US history when what they really mean is indentured servitude. Indentured servants were mostly uneducated Europeans who were contracted into the sometimes lengthy and harsh service of an American employer to pay off the debt of their ship passage to the US. It's true they were frequently taken advantage of, had few rights, and often treated poorly, but there were fundamental legal differences between indentured servitude and chattel slavery in the US.

1. Most indentured servants went willingly. While the terms of their service were often misrepresented, these were primarily people who wanted to immigrate but couldn't afford the ship passage, so they agreed to let an American employer pay their passage fee in return for their service to pay off the debt. Granted, some of them only wanted to go to America because it was the only way to escape religious persecution in Europe. Others were criminals who were sent to indentured servitude in the colonies instead of being sent to jail. There have also been some recorded cases of Europeans being kidnapped and involuntarily indentured to the Americas, but that was rare and more importantly, illegal. Most indentured servants chose the path they did, even if that path was misrepresented or their alternate choices were worse, it is not the same thing as being physically forced or born into legal slavery on a mass scale.

2. The duration of their service was finite and once complete, they were even given a payment of "freedom dues" to start them off in their new, free life. This may have been cash, new clothing, or even a parcel of land, and therefore some historians argue that at this point, these servants would have been better off than those who came to America on their own dime. It's true that many indentured servants had years tacked onto their contract if they tried to escape or otherwise broke their contract, and others were so maltreated that they did not survive to the end of their contract. But many also not only lived out their contract, but prospered afterwards because of it. The typical length of indentured servitude was 4-7 years, which is nothing like a lifetime of slavery.

3. Indentured servitude could not be inherited like hereditary slavery. An indentured servant's child was not automatically indentured too. In fact, indentured servants were not allowed to marry without their employer's permission, which was typically not granted (because this would mean more expense for the employer, without an extra laborer) so most of them did not even have children until released from their service. An employer could tack more time onto the service of a female servant if she became pregnant, but her child could not be indentured to the employer. Theoretically, a cruel employer could have raped a female indenture and then used her pregnancy to extend her contract so he could continue raping her. But the child was still free and more importantly, this was an illegal abuse of the system, compared to the hereditary slavery that blacks endured, generation after generation, on top of the legally sanctioned and encouraged "breeding" they were forced into to perpetuate their hereditary slavery.

6. There were several acts passed by the British and US government which deterred and reduced indentured servitude and had no impact on slavery. These included the Passenger Vessels Act 1803 and the abolition of Debtor's Prison in 1833. If indentured servitude and chattel slavery were the same thing, why would laws influence one but not the other?

7. While the rights of indentured servants were limited (they could not vote, for example), they did have certain rights that slaves did not. Indentures had the right to medical care, food, shelter, and clothing, as well as the right to take abusive employers to court, none of which were rights afforded to slaves. Of course, these rights may not have always been well met, and suing an employer was probably not realistic since indentures wouldn't have had the money to hire a lawyer or file a law suit, but the legal distinction is still important in terms of how the law viewed indentured servants versus slaves. Slaves did not have the legal right to sue anyone, and slave owners had the legal right to treat their slaves however they wished, including abuse. If a slave owner wanted to starve a slave to death, he had the legal right to do that, whereas this would have been consider murder if done to an indentured servant.

8. As African slavery grew in the US, indentured servitude declined and their work load became different from those of slaves; they were given lighter and more skilled work. This meant the working conditions of indentures improved and they may have even gained skills they could use to prosper once their contract was finished. The very reason slavery grew and indenturing declined was because slavery was absolute in its lack of freedom, whereas indenturing was not, meaning plantation owners got perpetual free labor out of slavery, whereas they didn't with indentured servants, once again highlighting the difference between them.

I am not saying indentured servants didn't suffer at the hands of their employers, many of them did and that was a great injustice. But for the poor, life was always hard, and many people suffered at the hands of their employers even if they weren't indentured. Before labor laws and unions protected the rights of employees, even paid servants (not indentured) were often beaten, received wages too low to feed them, suffered long, grueling hours of hard labor, were sexually assaulted by their employers, etc. It didn't make them slaves. What made someone a slave was not the conditions they lived or worked in, but their legal status, and I hope I've illustrated how the legal status of slaves (ie, not free) in the US was very different from those of indentured servants (ie, free) and therefore they should not be lumped together. In fact, the very first Africans brought to the colonies were actually indentured servants, not chattel slaves. Because there is a distinction. Obviously, this eventually changed with time and turned into the mass slavery industry we know of in history.

And of course, throughout all of history, people of all kinds were enslaved at some point. I am not saying no white person was ever enslaved in history - the Romans, for example, enslaved lots of white people. But the topic of "white slavery" is normally brought up in relation to US history and it's hereditary, chattel slavery, as though they were the same thing, when clearly, they were not.

So the next time someone tries to tell you about "white slavery" when they actually mean indentured servitude, remember these facts and take whatever agenda they may have with a grain of salt.