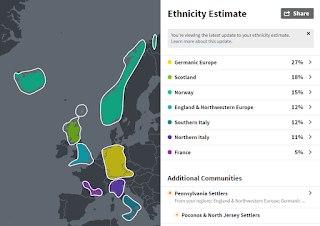 Well, that was quick. Only days after announcing the update would happen in the next coming weeks, I have received the update already. It may still be rolling out for some people, but I imagine you'll get it in the next few days.

My update in comparison to the last one really highlights once again how much genetic overlap there is among the British Isles, Germanic Europe, and Scandinavia. I have ancestry from all three places, and AncestryDNA (and other companies) can never get them right. With each update, it swings from one extreme to another. The last update, for example, had me at 0% Norway even though I had one Norwegian great grandfather. With the latest update, I'm now 15% Norwegian! This is pretty close to the 12.5% the paper trails says I should be, but of course, we do not necessarily inherit exactly 12.5% from each great grandparent, so 15% is totally plausible, apart from the fact that all other reports usually underestimate my Norwegian ancestry (usually under 10%) which has also lead me to suspect that I inherited less than 12.5% from that particular ancestor. I don't know that though, it's just a hunch, so I can't say 15% is "wrong".

Anyway, here's the full breakdown, in comparison to what it was before.

My Italian results have been bumped back up to a reasonable amount (if you recall, I had one Italian grandmother), but they are still lower than what I know they should be. As I've talked about before, my paternal grandfather tested so I know I inherited 18% from him, which means I inherited 32% from my paternal Italian grandmother. So I am fortunately enough to know for a fact that I should 32% Italian. The new results breaking down North and South Italy add up to only 23% (though if that 5% France is coming from my Italian ancestry, then it's 28%). Had my grandfather not tested, I would assume 23% is close enough to the expected 25% and been happy with that, but because I know differently, it's a little disappointing. Additionally, my Italian ancestry is supposed to be entirely southern, not northern, but I'm not hugely surprised they weren't able to tell the difference.

Back to Northern Europe. According to my tree, I should be about 23% Germanic, 32% British (English and Scots-Irish), and as mentioned, 12.5% Norwegian. But I am German and British on both sides of my tree, so really, who knows how much I inherited of each? Especially with the new breakdown of the British Isles into four groups - England, Wales, Scotland, and Ireland - I really haven't even tried to determine how much of my English vs Scots-Irish I might have inherited according to my tree. I do have more recent English ancestry (an English ancestor who immigrated in the 1850s, whereas all Scottish or Scots-Irish immigrated in colonial times), so all I can say for sure is that I can reasonably expect my English results to be higher than Scottish, which they are not. However, combined, they do add up to 30%, which is very close to my estimate according to my tree, and I correctly don't have any results in Wales or Ireland. Of course, this leaves me with 27% Germanic, which is again pretty close to my estimate based on my tree.

So, overall, this new DNA estimate is pretty accurate, if we look at it from a broader view by lumping North and South Italy back together, and England and Scotland back together. If they hadn't tried to split those regions up and just changed my percentages, it would really be spot on.

I can't say the same for my dad's report (right). 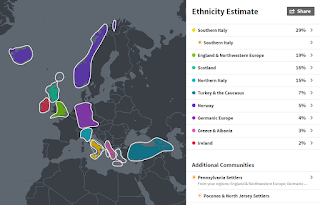 The last update in 2019 had my dad at exactly 50% Italian, which was exactly right. My dad's mother was Italian and since we do get exactly 50% from each parent, his ethnicity report should reflect that. A few percentage difference may be within a margin of error, but to get exactly 50% gave me a lot of confidence in the results, so to move away from that 50% even slightly feels like a major downgrade.

According to my dad's tree, he should be 50% Italian, and the other half about 30% Germanic, 20% British (mostly Scottish or Scots-Irish), so to see so many more regions in his list than before instantly felt like a regression. His total Italian results are only 44%, and even if you try to add in neighboring regions like Greece and Turkey, he then has 54%. I know that's not far off 50%, but again, when his previous results were exactly 50%, it feels like a downgrade to deviate from that even slightly.

His Germanic results didn't change much at all, which means it's still being massively under reported, but when you consider that it's probably showing up under the "Northwestern Europe" part of England, it's actually pretty accurate. Combining Northwest Europe and Germanic, he gets 22%, which isn't too far off what his tree estimates. And who knows where that 5% Norway is coming from - could be either his Germanic or British ancestry. That leaves the 16% Scotland and 2% Ireland, which is very close to what his tree is for Scottish and Scots-Irish. 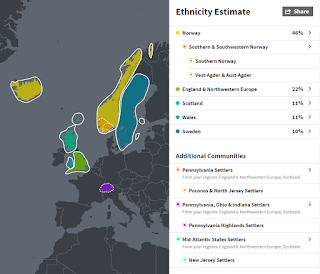 So again, combining specific regions does add up to make some sense, but there's also some regressions.

Over analyzing all my kits might be getting a little tedious, so I'll summarize the rest. My mom's kit (right) went from a very accurate 27% Norwegian (remember, she had one Norwegian grandparent), to a greatly overestimated 46%. She also got 11% in Wales and 10% in Sweden, neither being places she has ancestry in (and that Swedish results can't be coming from her Norwegian ancestry since that would bump it up to 56%, more than double what should be expected).

My paternal grandfather's results at AncestryDNA have always overestimated his British ancestry and underestimated his German ancestry. He should be about 40% British (Scottish or Scots-Irish), and 60% Germanic, but the results are always flipped, and this time is no different, with only 33% Germanic. Granted, he has 38% in England & Northwest Europe, which could go either way. Then he has 27% in Scotland. So what it's really saying is 38% of his DNA can't be distinguished between British and Germanic, which isn't surprising. 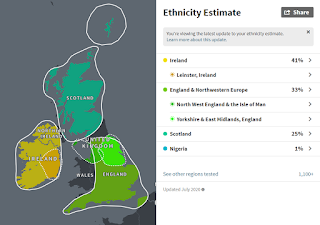 Finally, my husband's results (right). My husband is actually a British native - his father was Irish and his mother was mostly English with one Scottish branch and one Irish branch from further back, so he would be roughly 53% Irish, 41% English, and 6% Scottish. His previous results reflected that almost exactly with 43% England, and 56% Ireland/Scotland. So just like with my dad's Italian results, any deviation from that seems like a regression, and that's what happened here too. His new results have him at 41% Ireland, 33% England, and 25% Scotland. For someone who is pretty close to half English and half Irish, this is way off, but that's hardly surprising, since the PCA chart shows there's really not much distinction among these small, neighboring regions so I don't know why they are even attempting to split them up. At least his Genetic Communities are very accurate.

Additionally, the last 2 updates gave my husband 1% noise results in Africa, and for some reason it still remains. I know he's not the only one though, I have seen other reports of people with predominately British ancestry getting 1% in Africa with no known history of it. It's likely just noise, but I wish they'd sort it out already.

So, while I'm pleased that my Italian and Norwegian results accurately went up, the rest of the changes are a bit of a disappointment.