ACOM's City Directories aren't always the easiest records collection to use. Though they are improving, you'll probably find wildly inaccurate and nonsensical transcriptions - for example, a "1" instead of an "I". This is because they were transcribed by a computer with what is called OCR, Optical Character Recognition. The benefit is that it's quicker than having human beings index millions of names but the downside is that there can be lots of errors, especially depending on the quality of the original document or the scan. Basically, OCR is programmed to recognize the basic shapes of common characters in the English language on an image/scan and output it into text so when two or more characters look similar, it can get confused as to which one it is. This, of course, means that using the search function on the city directories is hit and miss but here's some tips to help you find what you're looking for. 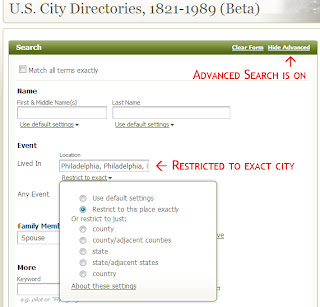 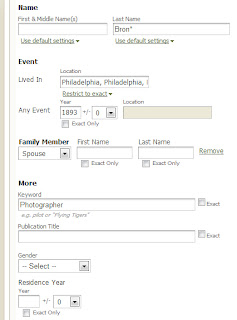 I've been effectively using these methods to find the time periods and addresses of which different photographers in or around Philadelphia operated in order to get approximate dates on when my "mystery photos" were taken. For example, one of the photographs says the photographer and studio information is "James Bronson 4721 Main Street Germantown" and I discovered James Bronson had a studio at this specific address only during the years of 1893 and 1894 so I was able to narrow down one photo to only a two year period. Of course, it's important to remember that the directories didn't update on the fly so it's possible for an individual to move addresses after the directory is published with their former address. Theoretically, that means it could have also been taken in 1892, though the directory says Bronson's studio was at 4946 Germantown Ave in 1892, he could have moved later in the year.

Even if your photos aren't mystery photos and you have identified the individual in them, finding when the photographer operated at the address labelled can still help narrow down when the picture was taken.

I also used these methods to find tenants of my ancestor's properties by putting the address into the keyword field. There are many various ways to use these methods.
Posted by History Chick at 7:34 AM