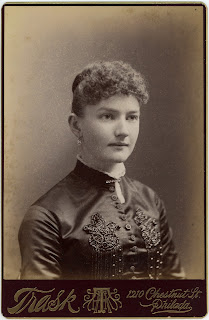 A cabinet card of an unknown woman. I have a lot of unknowns in my family's collection, and I think many of them were actually friends or distant relatives of my ancestors that my family simply held onto even though they weren't labelled. Given the location and time period of most of them, I think they were probably friends or relatives of my Rorer or Fallows ancestors in the Philadelphia area.

The first thing I looked for was the photographer. It may not look like anything more than a decorative flourish at first, but that swirly thing in the middle of the bottom margin is the photographer's monogram and if you look closely it's the initials A.P.K.T. City directories tell me this was Albion K.P. Trask and that his photography studio was found at 1210 Chestnut Street in Philadelphia from 1879 to 1893. This narrows it down to almost a decade.

The curly/frizzy bangs (or fringe, if you're British) were popular throughout the 1880s and into the early 1890s as well, so her hairstyle is very consistent with the photographer's studio years. 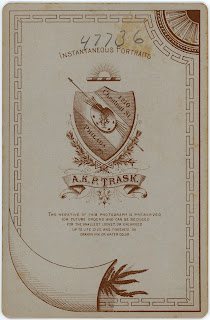 The dark color of the cabinet card is also telling. These were used from about 1883 to 1895, although they were more expensive, so lighter cards were still dominant at the time. This helps narrow down my time frame, but can I narrow it down further?

The clothing she's wearing is very interesting. From time to time, I see this kind of beaded embroidery on the chest, especially on shiny, satin material like this. It seems to have been popular in the late 1880s and early 1890s. Given the lack of puffed shoulders or sleeves, I would normally think it's more likely to be late 1880s, but I can't completely rule out early 1890s. Just because a certain trend was fashionable during an era doesn't mean it was the only thing people wore.

Even more telling is the back of this cabinet card. The artwork covers nearly the entire back of it, which according to Phototree puts it in the range of 1888-1900. But most notably is the beveled edges. You might be able to see them in the image above, decorated in gold. Phototree tells us that beveled edges were used 1892-1900. We already know this particular photo is not later than 1893, due to the photographer's address, so the beveled edges narrows it down to 1892-1893.

The other elements, though they may not have narrowed it down this far, are still worth noting and knowing for other photographs, and understanding more about the subject. The extra expense of the dark card and the elaborate artwork on the back of the card suggests this photographer was on the pricier end of the scale, and that tells us something about the woman in the photograph too, she obviously wasn't exactly poor. This also helps me narrow down which branch of my tree she came from (even if she was only a friend of that branch).

On another note, the photographer Albion K.P. Trask was born about 1831, and died November 11, 1900, which was well over 70 years ago, meaning that the copyrights of all of his photographs are expired and now in the public domain. This leaves me (and anyone else) free to share and publish his photographs without permission.
Posted by History Chick at 11:20 AM