This is a topic I've touched on before and something which has been very well covered by The Legal Genealogist too, but since it still persists in coming up in the genealogy field as greatly misunderstood, I feel the need to go over it thoroughly as well, as both an amateur genealogist and professional photographer. The following only applies to US law, though other countries may have similar laws.

Many people seem to be under the impression that because they inherited a photograph, particularly one of their ancestor, it means they own all rights to the image, and get upset when someone else, usually another descendant or relative of that ancestor, "steals" it and adds it to their own tree, or shares it in some other way, especially without "permission" or at least "giving credit" to them. Sure, it might be a little rude, but before you get outraged and indignant, first be sure that you really understand copyright ownership.

Most family photos are unpublished works, which means (unless otherwise agreed upon, which isn't typical) the copyright is retained by the photographer for the duration of their life plus 70 years after their death. How can a copyright be retained by someone deceased? Just like any property, their heirs inherit it. So unless you or your ancestor took the photograph, you do not own the copyright, and if the photo is still in copyright, you may actually be the one committing copyright infringement by publishing it online without the photographer's or their heir's permission. It isn't exactly fair to get angry at someone for "stealing" a photo you had no right/permission to publish online to begin with.

If the copyright has expired (so it's been 70+ years since the photographer's death), then no one owns it and no one is legally doing anything wrong by copying a photo you shared. Sure, it might be a little rude to do so without a thank you, but when you make an expired copyright image publicly available, you have to assume it's going to get copied, because people are going to assume you put it out there to share it, not just show it off. And as for "giving credit" - I can certainly see the value in identifying the source of who originally scanned and shared the photo, so that any questions about it can be redirected back to you, however, that is called citing a source, not giving credit. (While on the topic of giving credit, it is also worth noting that when an image is still in copyright, giving credit even to the rightful copyright holder does not absolve you from copyright infringement, only plagiarism. Copyright is the right to publish, distribute, alter, etc so if you do not own the copyright and did not get permission to do so, you do not have the right to publish it, even if you "give credit". A lot of photographers today will let it slide as long as you do give credit, because it's free advertising, but that's their prerogative, they still have the right to send you a cease and desist letter if they want to, so it's always better to get permission first.)

Maybe your ancestor did take the photograph. Maybe your ancestor was a professional photographer, or it's just a candid snapshot taken among family with a personal camera - they were available from 1900 onward, so it's very possible. Generally, professional shots are easily distinguishable from family snapshots, at least in history (today, there are lots of amateur hobbyists as good as professionals). Don't be fooled into thinking unprofessional photos aren't copyrighted, they are. The trouble with them is knowing who took it. If you can determine the photographer as your ancestor (pro or not), and that ancestor died less than 70 years ago, then congratulations, you probably do hold the copyright for that photograph. Only catch is, probably so do all the other descendants of that same ancestor, and if one of them was the person who copied the photo you shared, then technically, they are well within their rights to do so.

In conclusion, the only situation where you have any ground to stand on when accusing someone of "stealing" photos you shared of your ancestors is if your ancestor took the photograph, died less than 70 years ago, and the person copying the photo is not also a descendant of that photographer (pro or not) ancestor. I understand even if it's not a copyright violation, it still bothers people when someone doesn't say a simple "thank you", but all I can say to that is if it really bothers you that much, don't put photos online, or make your tree private (note: private trees are not available at FamilySearch or Wikitree). But if you do put them publicly online, and you're not the copyright holder, then you really have no one else to blame but yourself. 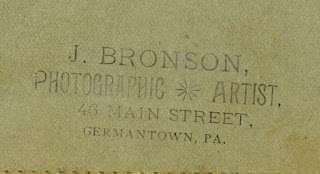 The photographs I've included above as examples were stamped on the back (shown right). J. Bronson turns out to be James (aka Jay) Bronson who was born May 23, 1862 and died April 13, 1914. Since this was well over 70 years ago, it means his photographs are assuredly in the public domain, which means I'm not only free to publish them without permission, I also really have no room to complain if someone wants to copy them. I would hope that anyone who does though could cite my blog as the source so anyone with questions about them, or seeking higher quality versions for printing, or anyone who knows who these women are can get in touch with me.

On another note, I have been unable to find Bronson at this particular address of 46 Main Street, Germantown, Philadelphia, Pennsylvania. Although there are many other listings of him on Main Street (aka Germantown Ave), none at number 46. That makes it difficult to narrow down the dates of the photos, but I believe they were taken at the same time, and that the similarity of their dresses suggests they may have been sisters. I'll go into more detail on this in another post.

The Legal Genealogist goes into more details about copyright laws in different situations, but I focused on the most common situation for most genealogists with photos of their ancestors, as it's the most applicable.

Posted by History Chick at 6:00 AM