I know I have been remiss in posting so I've come up with another feature which will detail events from my family tree that occurred on the same day as the post, however many years ago. I got this idea when it dawned on me that on December 7th of this year, my 2nd great grandmother died exactly 100 years ago. I don't think there's enough events in my tree to have each one be a milestone anniversary, like precisely 100 years, but I thought it'd be interesting nonetheless. 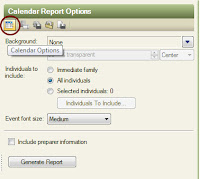 If you're interested in doing something like this yourself, I used FTM 2012 to create a calendar, including everyone in my tree. Just go to the "publish" tab and under "other" there will be the option for a calendar. On the right, under the options, choose "All Individuals". Also be sure to click the first icon in the toolbar row, shown to the left. Here you can customize what gets included (shown below) but I was a little disappoint that I didn't get the option to include any fact like I can with other reports. Only BMD gets included, I guess because they think those are the common anniversaries that people celebrate or mark. It's a shame they couldn't think of any other use one might have for a calendar, like this one! I would have liked to include facts like military enlistment, baptism, burials, immigration, etc. I wish FTM would add a feature that would basically be like a timeline of all the events in my tree. It's worth noting there is a Timeline Report but it's under "Person Reports" and is therefore only a timeline for one person. I realize a timeline of every event from every individual in a tree would be a lot of data but what use is a genealogy management program if it can't process a lot of data, right? 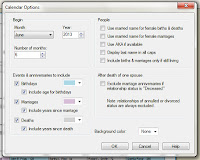 But I digress. The options you do have are things like how many months to include, whether to list people's ages or how many years it's been since that event, whether to use married names for females, etc. These are all up to you. The important ones that you make sure are UNticked are "Include births and marriages only if still living" and "Exclude marriage anniversaries if relationship status is "deceased". If you leave these ticked, you'll only get results for people still living.

You may wind up with a calendar full of names you can't remember, which is why I'll be looking up each person and getting more details of the event - but the calendar provides a quick and easy reference for finding what happened "on this day in my family tree".

I want to say a few things about my dad on Father's Day, much like I did for my mom on Mother's Day.

I never considered myself a "daddy's girl". When other women talk about how they had their dad wrapped around their little finger, this is like a foreign concept to me. Out of my two parents, my dad was always the stricter one, the disciplinarian. He could also have been considered a workaholic during a certain period of my childhood when he was frequently away on business and working what seemed like 12 hour days so there were times when he felt somewhat absent. But perhaps because of this he was also sure to make quality time for his family and we always had a lot of fun together. In fact, just like my mom was the reason we did creative stuff like make jewelry out of puzzle pieces, my dad was the reason we did stuff like buy a go-kart and drive it around his office parking lot after hours. Just like my mom, my dad never does things by halves. Some of my favorite family memories are a result my dad throwing himself into his hobbies and interests, such as when he got his pilot's license and leased a private plane. For a time, it felt like every weekend we would go for a leisurely fly in the Cessna, and perhaps practice some touch-and-go's (landing and quickly taking off again), sometimes all four of us, sometimes just me and my dad. Apparently, I used to critique and rate my dad's landings and much to my dad's amusement, I could be quite harsh on a particularly bumpy landing!

One of the activities that I never took to was camping. Both my parents have always been the outdoorsy type but I obviously didn't inherit this from them. After taking me camping for the first time, my dad asked me what I thought of it and I firmly gave him a negative response, which amused him because I apparently reminded him of his sister. He still marvels that someone so young could have been so decisive and felt so strongly about camping.

We also played a lot of card and board games as a family but the two which are sentimental to me and my dad were Uno and Backgammon. Uno, for some reason, became a never ending game for me and my dad. We would play round after round, a tablet of scores getting longer and longer, keeping tabs so we could leave it for days and return to it whenever we could. We didn't play Backgammon very often and to be honest, I'm not even entirely sure I remember how to play it. But I remember my dad teaching me how to play it and I think the reason that sticks out in my memory is because it was the first "grown up" game I learned (as opposed to kiddie games like Connect-Four) and yet my dad never second guessed that I would be able to understand it.

That's how I always remember my dad from my childhood, he was always encouraging me to pursue the things the interested me, regardless of whether I was good at it or not. I had always had an interest in art but sadly, I never developed a talent for it. However, that didn't stop my dad from taking me to art museums, hanging Monet posters on my wall, introducing me to pastels, buying me a huge art supply box and filling it with colored pencils, brushes and paints, etc. I may have never become a painter but as I got older, my interest in art developed into an interest in photography, a medium that I did seem to have an aptitude for, and thanks again to my dad's encouragement, I am now a professional photographer. Both my parents have always been incredibly supportive but unsurprisingly (with all his hobbies over the years) my dad had a pre-existing interest in photography and was more than willing to hand over all his photography equipment for my use.

Life with my dad was also fun because of his great sense of humor. It may come as a surprise to him that I have fond memories of our family dinners, sitting around the table as my dad told us jokes or funny stories from his past. I say it may come as a surprise to him because as a child, I was a "picky eater" and the dinner table often became a battlefield, the scene of a battle of wills. So it's a true testament to his sense of humor that I have good memories at the dinner table.

He was also always good-natured about an on-going prank that I used to pull on him. This is unusual because I'm not normally a big fan of pranks but in fairness, my dad would pull the same prank on me in return. I don't know how it got started but it became a game of stealth, attempting to slap a sticker (usually from a banana or apple) on the other's back without them noticing. I think my mom typically intervened before either one of us went off to work or school with a sticker on our back, which would have been like a step away from a "kick me" sign. However, one day when I was obviously getting a little older and a little more deceptive, I managed to elude both of them. Apparently my dad got half way through the day before someone at work asked him "Why do you have a Dole sticker on your back?" But he came home in smiles, looking almost proud of me that I had bested both him and my mom.

There is so much more I could have written about both my parents, we just did so much together as a family and I have so many good memories; what's amazing is that my dad managed to do so much with us despite how demanding his job was for most of my childhood. He would go on so many business trips that we had a rule - if he was gone for a week or longer, he had to come back with a gift for me and my brother each. And given that many of his trips were to Europe and Asia, that meant we had many exotic gifts brought back from far-flung parts of the world. My favorites were the ones from Asia, particularly the silver jingle bell anklets which I was devastated when I grew out of.

Father's Day has always been rather special as well because it tends to fall on or around my birthday. This is one of the years that it landed on my birthday but sadly, we can't spend this day together like we used to (which was often at the airshow) because I'm living in another country. Hopefully that won't be a problem in the future since my husband and I have plans to move back soon but for now, I want to say thanks, Dad, for all the hard work you did so that our family had the means to do all the fun stuff we did. Thanks for always thinking of us even when we were so far away, for always making the time for us despite how stressed and tired you were from work. Thanks for always supporting my interests and hobbies as much as your own, for never complaining when I was sick and accidentally threw up on you, and for always holding me tightly when mom was digging a splinter out of my foot with a needle. I am so lucky to have both the parents I do.
Posted by History Chick at 4:00 AM No comments: