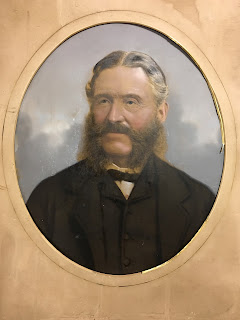 This is one I found in an antique store recently. It is actually a crayon enlargement, which was an enlarged copy made of a cabinet card or carte de visite. The trouble with enlargements of such photos was that the results often weren't very clear, so the artist or photographer would then enhance it by drawing over it with other materials like charcoal or pastels. Sometimes, such as in this case, it would be colorized, but that was not always the case, there are many black and white crayon enlargements. Either way, the effect of the enhancement typically makes the image look almost more like a drawing or painting than a photograph, but at the same time, certain elements appear too realistic to not be a photograph. That's because it's basically both.

I didn't purchase this one and didn't have a measuring tape with me, but it was probably something like 11x14, though they can be even larger. Attached to the back, there was a torn piece of paper with the date as October 2, 1882. Although the date of this one is known, the Library of Congress says crayon enlargements were available from the 1860's to the 1920's. There is a second date written along the side of the paper, November 14, 1882 - most likely, this is the date it was finished, which means it took little over a month to complete. The paper, as you can see below, includes information about what colors should be used. Much of it is missing, but it looks like the beard was described as "light brown but very grey". Something else, perhaps his hair, was "very brown and not so grey". I'm guessing the "(very?) black but very grey" was meant to be his eye color. Unfortunately, the price is not included, though there is a space for it on the form, and there's no company name surviving.

The enlargement may be from 1882, but the original photograph could theoretically be from almost any time before that. They were typically made from carte de visites (1860s-1870s) and cabinet cards (1870s-1890s) so that means we're not looking at anything before the 1860's. Looking at the clothing and hair, men's fashion tended to evolve much more slowly and subtly than women's fashion but there are a few things to take note of. The facial hair style of a mustache connected to the muttonchops with a clean shaven chin (known as friendly muttonchops, face shelf, or hulihee) was popularized by Ambrose Burnside, and is where the term "sideburns" comes from. At the time Burnside introduced the style in the early 1860s, it was considered unusual, so it probably didn't become popular until a little later, and examples of it can be seen into the 1880s. That doesn't narrow down the original photo much more, probably around 1865-1882. The thing that really helps narrow it down is the fact that the man in the crayon enlargement is wearing a high buttoned, single breasted waistcoat with this style of lapels, which (according to History in the Making) was most popular around 1880-1910. That strongly suggests the original was from not much longer before the enlargement was made in 1882.
Posted by History Chick at 1:23 PM No comments:

Previously, I posted a link to Roots & Recombination's article on Gedmatch's Spreadsheets so I didn't go into it myself when I was detailing how Gedmatch's admixture tools work. However, I've been seeing some people still have questions so I'm going to cover it after all. Not that Dixon's explanation isn't good, but I know for me, it didn't fully click until I realized what I'm about to show you.

To find the Spreadsheet option, run your kit number through your desired admixture calculator (see Part 1 if you need help with this), and under the buttons for Oracle and Oracle, there will be a button for Spreadsheet.


Firstly, to clarify this up front, the Spreadsheets are not your personal results. If you look at the Spreadsheet for the same calculator with different Gedmatch kits, they will all be exactly the same. Above is a portion from Eurogenes K13 Spreadsheet - compare it with your own, you'll see it's the same.

So what are they? Basically, the Spreadsheets are showing you what the more specific Oracle populations would look like when run through any particular admixture calculator. So using Eurogenes K13 as an example, the first row for Abhkasian (a small area in the Caucasus mountains) is showing you that when run through Eurogenes K13, the Abhkasian population got 1.64% in North Atlantic, 4.62% Baltic, 9.81% West Mediterranean, 54.30% West Asian, 22.78% East Mediterranean, etc. What this means is that if you were of full Abhkasian descent, you might expect to get admixture results like this.

To illustrate this, note (below) how if you add up the numbers in a single row, they add up to 100% (give or take 0.01-0.03%, as is usual even for your own results, which is probably just due to rounding up or down the individual percentages). So it's showing the admixture results of specific populations as though they were Gedmatch kits.


It also shows either how mixed or how exclusive a certain population's DNA is. You might expect an Italian to get results primarily in East and West Mediterranean, and indeed, most of the Italian populations (East Italian, West Sicilian, Italian Abruzzo, Tuscan, Sardinian, South Italian, North Italian, even Italian Jewish) do get high results in those categories (see below). But notice how they also get high results in North Atlantic, meaning that even people from the Southern most areas of Europe still share a lot of DNA with the Northern part of Europe (at least in this calculator). Even East Sicilians are getting 16.46% in North Atlantic.


Not only can this explain some unexpected admixture results, but it can also explain unexpected Oracle results. Previously I've talked about how Eurogenes K13 Oracle 4 results matches me to a lot of Jewish populations, namely Kurdish Jewish and some Iranian Jewish. I have no known Jewish ancestry and don't get any Jewish results from any of the big DNA companies. But if I look (below) at Kurdish Jewish and Iranian Jewish in the K13 Spreadsheet, I see they have the highest results in East Mediterranean, which is expected, but also 8-10% in Wed Mediterranean, which is the same category my Italian ancestry peaks in, so perhaps there is some shared DNA there and K13's Oracle is picking up on that in my case.


It's difficult to find a population that gets more than 90% in one category (shown below), but one of the ones that does is Karitiana, a group of Native Americans in Brazil. This population gets 99.62% in (unsurprisingly) Amerindian, and only trace, less than 1% in other categories. The Dai population (a Chinese group) is another, getting 90.46%, again unsurprisingly, in East Asian. And another example is the Papuans (indigenous peoples Papua New Guinea) getting 94.59% in Oceanian. None of this is surprising, as these are all populations which would be expected to be fairly endogamous to begin with, knowing their histories.


So while this tool gives us some very interesting information into the make up of each population, and may help provide some insight into how and why your results turned up the way they did, they are not your personal results.

UPDATE: To help better visualize the Gedmatch Population Spreadsheets, I've started creating some bar charts. I'm a visual person, so I find these charts quicker and easier to make sense of than looking at a bunch of numbers. They are interactive so you can hover over sections to get details. If people find this useful, I'll keep adding them.