23andMe Results (and comparisons with AncestryDNA and FTDNA) 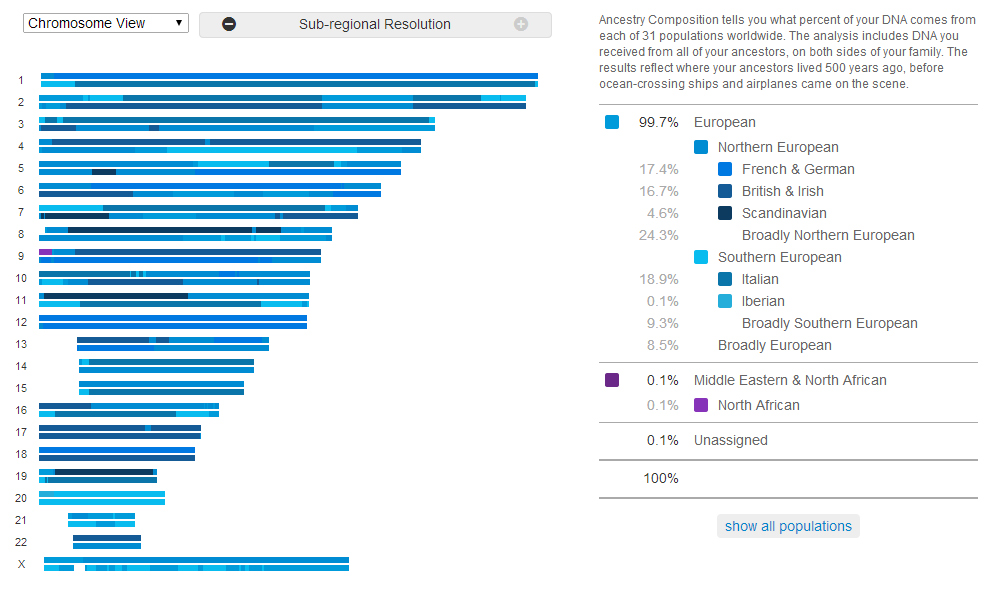 So, given the varying results between AncestryDNA and FTDNA, I decided to test with 23andMe as well. I talked before about how AncestryDNA said my genetic make up was 55% British, 5% Western European (German, for me), and 2% Scandinavian (Norwegian, for me) while FTDNA said it was 0% British, 26% Western/Central European (German), and 34% Scandinavian (Norwegian). The only thing they could agree on was roughly the same amount Italian. What I determined from this was that some of my DNA was nearly indistinguishable between British, German, and Scandinavian.

Hoping to get a third opinion, I tested with 23andMe, also because their results show which portions of my chromosomes are categorized in which regions. I'm hoping this will help me determine how I'm related to my DNA matches (if I match someone on a portion of a chromosome that says Italian, theoretically I should be related to them by my Italian branch), but I haven't determined if this is the case or not.

In any case, these are my 23andMe results:


23andMe seem to be more honest about the fact that some of my DNA is just too similar to multiple regions to be able to place it and this may why my results include 24.3% Broadly Northern European, 9.3% Broadly Southern European, and 8.5% Broadly European. The category Broadly Northern European includes the British Isles, Scandinavia, and Western Europe so about a good quarter of my DNA is indistinguishable among these regions. Other companies seems reluctant to admit that some DNA is just not distinct enough to narrow it down to a specific region, I guess because they think it devalues the product. I know some people really hate the "Broadly" results from 23andMe because they are frustrated by the vagueness of it but I'd rather see a company be honest about the fact that some DNA just can't be placed more specifically than try to incorrectly place it in a specific region. That in itself still tells you something, it tells you that a portion of your DNA might be such a mix of Viking and/or Germanic tribes that it can't be distinguished as British, Scandinavian, or Western Europe. It means that portion of your DNA isn't Celtic or Roman.

Similarly, while Italian comes back only 18.9%, it also says 9.3% Broadly Southern European which I'm sure is just more of my Italian genes because I have no other known Southern European heritage. So it's telling me I'm about 28% Italian, which is not hugely dissimilar to the 31% AncestryDNA estimates it at.

I originally tested with AncestryDNA because I already had my tree there and so it seemed to make the most sense. But without a chromosomal/genome browser, I quickly realized how useless the matches are and turned to GEDmatch as a free replacement - but of course not all AncestryDNA users are on GEDmatch. So I transferred my data to FTDNA for $69 because people say they have a bigger database of potential matches. Unfortunately, this was incorrect in my case. While they did have a chromosomal browser which was a step up from AncestryDNA, I had significantly fewer matches at FTDNA (only 245 compared to the 4,530 at AncestryDNA) and most of them don't seem to have uploaded a gedcom. Your mileage may vary. I have 988 matches at 23andMe, but the difference may also have to do with the criteria each company sets for how much DNA you must share with someone in order to be considered a match, not just how many people are in their database.

The downside to 23andMe, as far as I can see, is that even with a "public match" you have to individually request and share your genomes in order to use the chromosomal browser, unlike at FTDNA where you can view any of your matches genomes without having to ask permission. I will say though that 23andMe at least make it easy to send an invite to share genomes, with just a couple clicks. People who are very concerned with privacy might be more inclined to test with 23andMe (or AncestryDNA) but for those trying to do some hard research, the lack of instant access to compare chromosomal matches on 23andMe is frustrating (though less frustrating than AncestryDNA where viewing genomes is simply not possible at all). And like FTDNA, most 23andMe users don't have a gedcom uploaded, also very frustrating when trying to make a link between DNA and family tree. One thing I will say for AncestryDNA is that most users testing there have done so because they already have a tree there. Some Ancestry.com users moan and whine about the testers who don't have a tree or a public tree but they are in the minority in comparison to FTDNA and 23andMe users where the norm is to not have a tree (and where you can't request to see a private tree).

So each company has it's advantages and disadvantages. Keep in mind that only FTDNA allows data transfers (for $69) from 23andMe or AncestryDNA so if you test with another company, you can transfer the data to FTDNA for less than it would cost to buy another test with another company. But given that FTDNA has a public chromosomal browser, if you plan to only test with one company, I would recommend FTDNA, even though they have fewer matches in my experience. If you think you might want more than one opinion, I recommend testing with 23andMe and transferring your data to FTDNA. And of course no matter which company you test with, I highly recommend uploading your data to GEDmatch because it's entirely free, though there is an option to donate however much you want.
Posted by History Chick at 10:52 AM 3 comments: