What exactly is the AGBI and how do we use it? 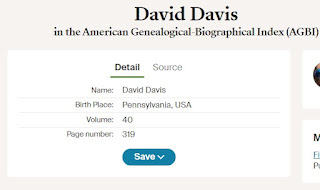 By now, you've probably occasionally come across a source known as AGBI, or American Genealogical Biographical Index, and maybe you've even attached it to your tree because it comes up as a hint for your ancestor, and everyone else has attached it to the same ancestor, and you don't want to miss out, right? But the details are usually vague, what is it even referencing and how do you know the records are for the right person?

The AGBI on Ancestry is basically an index of an index. It's referencing a big series of books that indexes tons of sources on early Americans. I don't know why Ancestry's index doesn't include all the data included in the book's index, but it doesn't. So to find the original source, you first have to look up the AGBI book index. You can find the books in a number of places online, I usually use the one at FamilySearch because it's free and accessible from home (it's not a restricted collection) - scroll all the way down (passed the listings that say off-site storage).

Ancestry's index should include a volume and page number, although weirdly the books don't include page numbers, that's okay, because they're in alphabetical order. So simply open the volume you're looking for, and then find the name you're researching in alphabetical order. There will likely be several entries for the name you're looking for, but you can usually tell which one you need from the location and/or time period included in Ancestry's index. Even so, the AGBI books can be seemingly as vague as Ancestry's index is, and sometimes it takes some understanding and/or Googling of what it's referencing.

Another example is a source just called "Transcript" - this is a reference to the Boston Evening Transcript, a newspaper that ran a genealogy column from 1906-1941, including details on ancestors not exclusive to Boston or Massachusetts. Obviously, it's very much a secondary source, so I'd be careful with it, but it's available from Newspapers.com covering the years 1848-1914, and at American Ancestors covering 1911-1941 (select the Boston Evening Transcript from "Database").

You'll also see references to Revolutionary War Rolls and Pensions, those are fairly self explanatory. There's also states with "Heads Fams" which is referring to the names of the Heads of Families listed on the 1790 census. Since the 1790 census is already widely available online and probably already attached to your tree when appropriate, this isn't a very useful citation anymore. There's lots of other sources included in the AGBI, but usually they are self explanatory, or you can find out what they mean with a little bit of Googling.

It's really important that you find the original record the AGBI is referencing because the index is so vague, there's really no way to know from it whether it's for the right person you're researching or not. You may often find that once you look up the original record, it's not actually a reference to the person you're researching after all. Probably, researchers on Ancestry just attached it to their tree because the name and perhaps location and/or time period fit, without looking into it further probably because they simply don't know how to find the original. But particularly with common names, you can't assume that means it's for the correct individual, and now you don't have to be one of those people.

Posted by History Chick at 12:45 PM No comments: 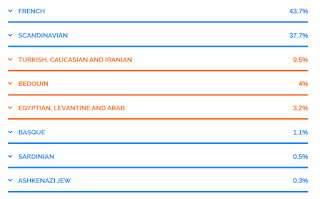 New DNA companies with the option to upload raw DNA data from other companies keep popping up, and honestly, it's hard to keep track of them. But recently, I tested one called TellMeGen out of curiosity. They offer reports on disease risk, traits, wellness, ethnicity, and even offer matching with other testers, all for free. But you know the saying, "you get what you pay for"? That's a little bit true here.
I can't really complain about the health and traits reports, they are easy to understand but also include the technical data if you want to explore that. They include reports on a lot of common health issues people want to know about, like cancer and heart problems. They correctly identified me as probably lactose intolerant, and having decreased levels of vitamin D. There aren't many Monogenic Diseases included, but that may just be because I uploaded from another company, so the data may not be there for some reports. It's always best to test with the company when they offer their own kit, but I can't afford to be buying all the DNA tests available out there.
But what we're focusing on is the ethnicity report, and I have to say it was not very consistent with my known ancestry at all. 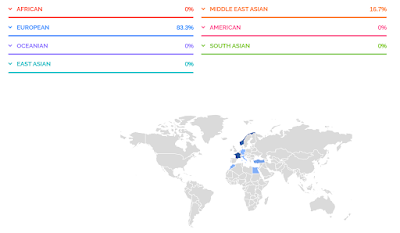 French 43.7%
Scandinavian 37.7%
Turkish, Caucasian and Iranian 9.5%
Bedouin 4%
Egyptian, Levantine and Arab 3.2%
Basque 1.1%
Sardinian 0.5%
Ashkenazi Jew 0.3%
The only location/population here that's accurate is Scandinavian. I do have Norwegian ancestry, but it is not this high - more like 12.5% (one great grandparent), and other companies usually peg it even lower than that, suggesting I may have gotten than expected from my Norwegian great grandfather. I'm guessing that my inflated Scandinavian percentage includes my British ancestry, knowing there is genetic overlap between them.
I do have some very early colonial French Huguenot ancestry too, from the 1600s - but it amounts to less than 1% of my tree, so I do not consider it relevant to DNA ethnicity reports. Probably, the high amounts in France are coming from my neighboring Germanic ancestry.
Adding up the Middle Eastern results, I get 16.7%, which I can only imagine is coming from my Italian ancestry, though why it didn't come up Italian, I can't say. But even adding the Basque and Sardinian results in for 18.3%, it still doesn't add up to my expected amount of Italian ancestry, which I've detailed here many times as being about 32%.
Although the 0.3% Ashkenazi is small enough to just be noise, knowing how endogamous the Ashkenazi population is and how reliable results in this category normally are, and should be, getting any results at all in this population when I have no known Jewish ancestry and get no results for it at any other company, is just another point against TellMeGen.
In short, my results simply do not make much sense. While it's not totally unreasonable to get some results in neighboring regions, this is a bit extreme, and if I have to jump through hoops to make sense of my results, it's not a reliable report.
Posted by History Chick at 9:48 AM No comments: