It's really important that we understand what certain records are before we try to extract information about them. In your research, you may periodically come across marriage bonds, which are not be to confused with a marriage license or marriage banns. Recently, I noticed someone had mistook a marriage bond for a marriage license and was wrongly assuming that the high amount money quoted on the marriage bond (500 pounds, or $1,000 depending on the time period) was a marriage license fee. As a result, they thought only wealthy people could afford to get married at all. Here's an example below from Brunswick County, North Carolina, 1856 (click to enlarge). 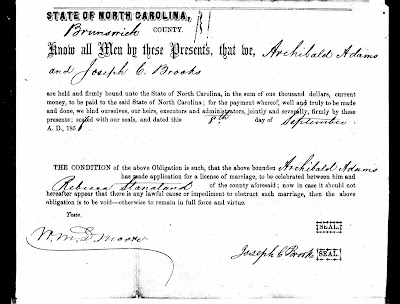 This was admittedly a lot of money for that time period. In 1856, $1,000 would be equivalent of about $36,000 today. Imagine paying a marriage license fee of $36,000! Some people would have nothing left for the actual wedding ceremony and reception, and some people wouldn't be able to afford it at all. Imagine not being able to afford to get married!
But that wasn't actually the case. Especially in history when it was really important for people to be married when they had kids. There's no reason the government would put such high restrictions on getting married for the average citizen to make it impossible or undesirable to get married, they would only be encouraging people to have children out of wedlock, and that doesn't make sense for the time period.
So what was this $1,000? A marriage bond was like a legal promise to marry, and the fee helped assure that there would be no legal impediments to the marriage because you and your co-signers only had to pay the fee if it was discovered that there was some sort of legal impediment to the marriage. The most common example of this is when the bride or groom was actually still married to someone else and not free to marry again. Since that didn't happen very often, most of the time, that $1,000 never needed to be paid.
Notice the terminology on the record:

"...now in case it should not hereafter appear that there is any lawful cause or impediment to obstruct such marriage, then the above obligation is to be void..."

So if there's no reason they can't be married, then the obligation to pay the fee is void (they don't have to pay the fee).
This was to help prevent things like bigamy from happening, because the bride or groom won't be likely to sign an agreement saying they owe $1,000 if it turns out they're already married to someone else if they really are still married to someone else. Some people might have done it, thinking no one would ever find out, but most people will definitely think twice about committing bigamy if it means paying a $1,000 fine, equivalent to $36,000 today.
Doesn't it make a lot more sense that the government would impose a high fee if it was discovered someone was trying to or did commit bigamy, than the government trying to discourage and even prevent some people from getting married at all? This is why it's so important to understand records instead of making our own assumptions about what they mean. If your assumption doesn't seem to make much sense, there's probably a more logical explanation. If you don't know what something means, usually a quick Google will help, and in the case of a more niche or nuanced topics, there are typically experienced researchers who can help in various genealogy communities. There are plenty of communities on Facebook, Reddit, Wikitree, FamilySearch, etc.
Posted by History Chick at 9:34 AM No comments: