Edit to add Mar 28, 2019: Since publishing this article, it's come to my attention that the We're Related app is no longer available from app stores to download. It will still function if you still have it on your device, but you can no longer download it. I contacted Ancestry.com support about this, but they refused to give me any information on when and why the discontinuation happened and why there was no announcement, and instead flat out denied that they even owned the app (see below). Maybe they sold it at some point, but they most definitely owned it at one point, as proven by older community/Facebook topics answered by Ancestry reps as though they manage or own it found here in 2017 and here in 2016. So I've now asked them if they sold it, when and why did that happen and why was there no announcement. No response yet.

I know it's only a little app that produces a lot of false connections, but this lack of communication and transparency with their paying customers is just so typical of Ancestry.com.

Edit to add July 29, 2019: Ancestry.com have finally recently sent out an email about the discontinuation of the We're Related app, and added a help article detailing the same, available here. How odd that they would finally announce the discontinuation of an app they claimed they didn't even own back in March. While it's nice to finally see some acknowledgment of this, it just highlights the fact that their customer service reps either don't know what they're talking about or are just flat out lying.

As many of you may know already, Ancestry.com has an app available called "We're Related". It's a fun little app that looks at Ancestry's vast database of user created family trees and attempts to find common ancestors between you and famous people, both of today and in history. It probably goes without saying that you should be careful about accepting the authenticity of the connections the app makes, given that it's based on user created trees and we all know how error-filled they can be, but that doesn't mean it can't be accurate sometimes.

Out of curiosity, I set out to determine how many of the famous people it's claiming I'm related to are actually accurate. Admittedly, I haven't gotten very far because most of the common ancestors the app finds are colonial, meaning they can be difficult to research. That doesn't mean the app is wrong, just that a lot of them can't be confirmed or denied either way. But so far, I have been able to confirm one link, and deny another.

I started with the ones who had common ancestors I recognized because they were already in my own tree (the app will extend on your tree to find common ancestors even further back than you've researched). That way, I at least knew my own descent from that common ancestor was accurate, and only had to research the path from the common ancestor to the famous person in question.

So the first famous person I've been able to confirm my relation to is Stephen Amell (shown above). For those of you who don't watch the TV show "Arrow" based on the D.C. Comic's superhero Green Arrow, Stephen Amell is the star of the show (also, you're missing out). He's not exactly an A-lister but it's still pretty cool. Additionally, although the app doesn't mention it, Stephen Amell's cousin is Robbie Amell, who had a brief part in the corresponding TV show, The Flash, and it's their shared ancestry which I also share so I'm related to both of them. Our shared ancestors are Jacob C Gottschalk, who was the first Mennonite bishop in America (not to be confused with the first Mennonite minister in America, the more famous William Rittenhouse), and his wife Aeltien Symons Hermans. My path to Jacob is well documented, since he was a somewhat well known historical figure, at least among Mennonite history, his descendants are well documented, which made researching down to Stephen and Robbie Amell fairly easy as well. Jacob was my 7th great grandfather and Stephen's 9th great grandfather, making us 8th cousins twice removed.

Sadly, not all the connection are this easy to confirm, nor are they always so accurate. I went after another suggested relation, Nat King Cole (shown right). The app seemed to think we shared ancestors Peter Schumacher and his wife Sarah Hendricks. Again, these ancestors were already in my tree so I knew they were accurate and only needed to research down Nat King Cole's side. On his path, the app suggested that Peter and Sarah's daughter was Fronica or Frances Schumacher, which indeed she was and I already had her in my tree. The next step showed Fronica's son Peter Van Bebber b. 1695, which was again correct according to the research already in my tree. But next it claimed that Peter's daughter was an Esther Van Bebber b. 1707 who I had no record of and anyone with any kind of observation skills will immediately notice that it's highly unlikely Peter had a child when he was only 12 years old. So I don't know who has this lineage in their tree that the app is picking up, but it's probably incorrect and it's a good thing I checked it before accepting it as fact. Looks like I'm probably not related to Nat King Cole after all. Bummer.

The good thing about the app is that it does use words like "Possible Common Ancestor" so hopefully people don't take it too seriously without researching and confirming connections. Additionally, at the bottom of each pathway (either from you to the ancestor, or the famous person to the ancestor), it asks "Does this path look correct to you?" and offers a thumbs up or thumbs down (shown below). Unfortunately, it doesn't offer any kind of comment box for you to detail what looks wrong about it if you thumbs-down it, but it's better than nothing.

Also noteworthy is the one I found in which the pathway from me to a common ancestor who is in my tree may have been wrong. When looking at the suggestion for my relation to Elizabeth Montgomery, we allegedly share known ancestors of mine, Robert Cobbs and Rebecca Vinckler - however, when I open up the pathway from myself to Robert, there is a very noticeable inconsistency with my own tree on Ancestry.com. In my tree (which the app is supposed to be working off of), Thomas Cobbs Jr is obviously the son of Thomas Cobbs Sr, who is the son of the Robert Cobbs in question, but in the app, it bizarrely has the mother of Thomas Cobbs Jr as Susanna Moon, who is then the daughter of Mildred Cobbs, the daughter of Robert. 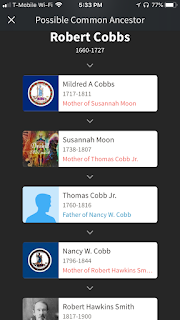 Now, I supposed it's not impossible that the pathway in the app is correct and I just have yet to discover it, which would mean I am descended from Robert Cobbs in two ways. But that would also mean Susanna Moon married her uncle, and that sounds kind of gross and highly unlikely. I know it's not uncommon for 1st cousins to marry, but uncle and niece? It's not something I've ever come across (except in royalty/nobility, but that's different). Given the unlikeliness of this situation to begin with, and the fact that I have no record of Robert having a daughter named Mildred, I think this pathway is probably inaccurate. Even assuming for a moment it's correct, it's still strange that the app went with a pathway which is not in my tree instead of the one which is. So make sure you look at each pathway, even if the common ancestor is already one in your tree who you've confirmed. Don't just assume since the ancestor is correct, the pathway to you is as well. Regardless though, I am descended from Robert Cobbs, and so if Elizabeth Montgomery is as well, then we are indeed related, even though the pathway is wrong.

Although I have some criticisms of the app, it does give me a lot to do when I'm stuck on brick walls in my normal research. This gives me something different to explore, while still working on my family tree. Hopefully, as I carry on with it, I can continue to confirm or deny more and more relationships to famous people.

(Note: when you first set up the app, it will take a few days to look for and start generating people you're related to, and it will continue to update and add more and more people to the list over time.)
Posted by History Chick at 6:07 PM 25 comments: