A Tip on Photo Dating

More than once, I've come across people who seem to think that if a particular trend was in fashion during a certain era, it means people didn't wear anything else! This is definitely not true. Just like today, there was often more than one trend popular at the time, and not everyone wore the most trending fashion, at least not all the time.

Recently, I saw a group photo (shown below right, used with permission from owner Ashley McQuillen, who asks relatives to contact her by email) including several women wearing the popular light colored shirtwaists with darker skirts, which were popular around 1898-1910, apart from one woman who was wearing a darker colored blouse. An assumption was made by someone that because light shirts were popular at the time, the only exception to this would be if someone was in mourning and therefore wearing black.

Please, don't go down this path of tunnel vision.

Just because lighter blouses were popular at the time doesn't mean the only possible exception would be someone wearing black for mourning. I am not saying the woman wearing darker colors couldn't have been wearing black, or couldn't have been in mourning, just that you can't make that assumption, partly because that wasn't the only exception, and partly because we don't know it's black. Remember, in a black and white photo, light colors will often appear white, and dark colors will often appear black. It's not as though no other colors were worn before color photography was available! People wore a variety of colors, both light and dark, even during eras when one or the other was more popular.

In this historical clothing dating guide, you'll see if you scroll down all the way to the bottom of the 1900-1910 page, a group of women riding bicycles, all in light colored blouses except one. However, the one in a darker color is clearly not wearing a black shirt, as it's obviously a lighter color than her skirt. So she is not wearing black, which means she's probably not in mourning, but she is wearing a dark color, proving that not all women wore light colors all the time during this time period.

Consider also the impracticality of always wearing light colored shirts for a span of about ten years and trying to keep them clean in an era before the convenience of washing machines. In the same way that men of different stations in life would wear "blue collars" vs "white collars" depending on the type of work they did, so too would it have been impractical for certain women to always wear white or pastels. Even women of luxury probably still wore darker colors for certain activities, at least. In the cycling photo from the clothing dating guide (which I don't want to paste here because the copyright ownership is unclear), it seems that riding a bike would be one activity where it might be smart to wear a darker color.

Above (top left) is an image of my great grandmother, Emma Sarah Fallows (1888-1954). This was probably taken around 1900-1910, for a number of reasons. Her hair style, a typical Gibson girl style, was popular at this time, as was the bell shaped skirt she's wearing. It's a candid taken at her parent's home which was built in 1900, so it can't be before that year. The fact that it's a candid means it was probably taken with a Kodak Brownie, the first "snapshot" camera available/affordable to the general public, first released in 1900. But her clothing does not yet have the straighter waistlines that became popular for women in the 1910s, so it's probably pre-1910. As you can see, despite lighter blouses being more popular during this decade, she is wearing a darker shirt. Below are a couple more photos probably from the same day (she is wearing a cardigan but you can tell it's the same shirt, or in any case, it's a dark shirt). Note how her mother (Mary Ann Rorer) is wearing a lighter shirt. Same day/era, one woman wearing a light shirt, the other a dark shirt. There were no deaths in the family around this time, so no reason Emma would be wearing black for mourning, and even if she were, her mother likely would be as well. So don't get tripped up by thinking a popular trend meant no one wore anything else! That's not how fashion has ever really worked. 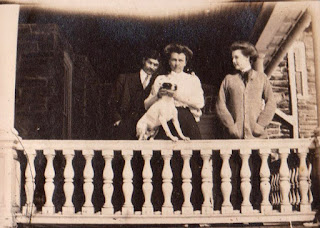 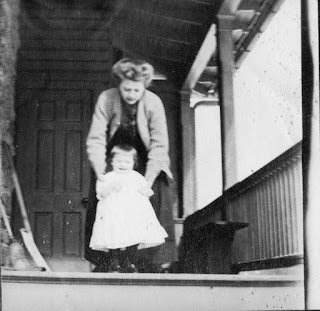 Posted by History Chick at 11:46 AM No comments: