An ancestor's place of worship and burial location are not necessarily one in the same. Many places of worship in dense urban areas did not have room for large cemeteries, or any at all, so just because your ancestors worshiped there doesn't mean they are buried there. They may have even had a funeral service there but been buried at a different church cemetery.
I was fooled by this recently when I found an obituary for my ancestor saying his funeral service was at First German Church on Juniata Street in Pittsburgh (a.k.a. First German United Evangelical Protestant Church and now known as Victory Baptist Church). I wrongly assumed that meant he was buried there, even though I know that today it's very common to have a funeral service in one location and the burial location in another, in my experience, this is usually done at a non-denominational funeral home, not two different churches. So when I got the ancestor's death certificate saying he was buried at "Spring Hill", I was kind of confused. For starters, I couldn't find any Spring Hill church or cemetery in Pittsburgh but then I recalled that the ancestor's in-laws were buried somewhere with "Spring Hill" in it. It was called Saint Johns Evangelical Lutheran Cemetery (now called Brighton Heights Lutheran Church Cemetery) in an area of Pittsburgh called Spring Hill, North Side (and to make matters more complicated, Brighton Heights Lutheran Church is not in the same location as the cemetery).

So the lesson learned is to not assume the place of worship and burial location are the same, even if the funeral service was held there.
Posted by History Chick at 12:59 PM 2 comments: 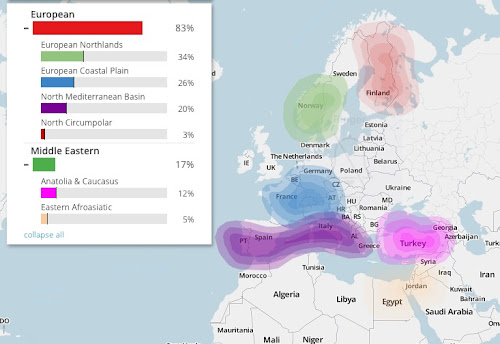 Family Tree DNA users might have noticed their new and hopefully improved myOrigins which replaces the old and less detailed Population Finder. Most notably, we now have more of a break down of our ethnic background into sub regions. Whereas before I was simply 72% Western European and 28% "Middle Eastern" (this was my Italian heritage), now it's telling me more specific regions such as 34% European Northlands (Norwegian, for me) and 26% European Coastal Plain (my Swiss/German heritage). Additionally, it seems to have regrouped 20% of that so-called Middle East into the more accurate European subgroup North Mediterranean Basin, but it's still telling me 17% Middle Eastern with subgroups 12% Anatolia and Causcasus (mostly Turkey) and 5% Eastern Afroasiatic (Egypt, Jordan, Israel, and part of Saudi Arabia).

It's very interesting but very different results than Ancestry.com tells me (I transferred my ancestry.com test to FTDNA for $69 - worth it, if you ask me). Ancestry.com estimates my ethnicity as around 55% British, 31% Italian, 5% German, and 2% Norwegian. FTDNA thinks my Norwegian and German ancestry is much stronger (34% and 26% respectively), my Italian is about the same at 37% if you combine Mediterranean and Middle East, but my British ancestry doesn't even seem to register on their radar. They also say I'm 3% North Circumpolar which looks similar to ancestry.com's 1% Finland/NW Russia, which I suspect is part of my Norwegian heritage.

Who's right and who's wrong? Well, it's not necessarily a case of right or wrong. The way this is all determined is by taking a control group of people who say all 4 of their grandparents were born in the same region and comparing their DNA to mine. Similarities to the control group for European Northlands, for example, will place a portion of my DNA into that category. Naturally, there can be problems with this. Who knows where the ancestry of the grandparents of the control group were from or how they migrated around Europe (which they will inevitably have done at some point)? Each company will be "correct" based on the control groups they used but different control groups will mean different results. But this is a good thing and reminds us that there is still so much to explore regarding our DNA, so much more it has to tell us. As control groups get bigger and better, we will get more accurate results which both companies continue to update.

At least they both seem agree on my Italian makeup being around 31-37%. In addition, some of GEDmatch's admixture proportions agree my Mediterranean or Italian DNA is about 34%. So I can say with some certainty I am about one third Italian. Considering I have only one Italian grandparent so statistically should only be a quarter Italian, it's safe to say my Italian genes are stronger than I had considered. My Nan would be so pleased.

GEDmatch is a great way to get another perspective on your percentages when ancestry.com and FTDNA don't agree but unfortunately they don't have maps or definitions for the regional categories so it can sometimes be difficult to figure out which groups on GEDmatch compare to those in the other companies. My next step is to figure all those out to see whether they agree more with ancestry.com's percentages or FTDNA's regarding my German, Norwegian, and British ancestry.