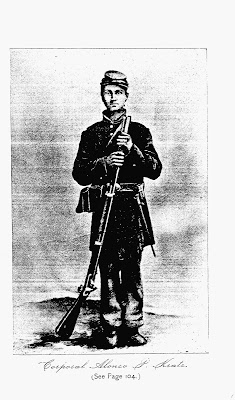 While researching descendants of my ancestors, I came across this interesting story, taken from "A brief history of John Valentine Kratz" by Abraham Fretz, pages 104 - 106:

Alonzo Philip Kratz, born July 26, 1845; died Feb. 12, 1865. At the age of seventeen he enlisted in Doylestown, Pa., on Aug. 8, 1862, as a private in Company F, 128 Regiment Pa., Vol., for nine months in the United States services. The reg't., soon went to the front. His first letter was dated at Camp Wells, Va., Aug. 12, 1862, from which it appears that army life agreed with him, he says: ''We don't get victuals like at home, but what we do get is enough and healthy; soft bread comes this way once a week." After the battle of Antietam he wrote, ''It was a hard fight, and I do not want to get in another like it. The rebels loaded their guns with a large round ball and three buck-shot, these flew around us like hail. We loaded our muskets with a large pointed ball, and it did some execution. A soldier who has once fought for his country, will never forget it, neither should he be forgotten." On Jan. 16, 1863 at Fairfax Station, Va., he says. "Our winter hut is built; it is of logs two feet high. and our tent is the roof: It is a comfortable house that will keep us dry and warm." On Mar. 25, 1863 he wrote from Brook's Station, Va., "We have five weeks yet to serve; we have been in several skirmishes besides the great battle Sept. 17 (Antietam), and there may be another big fight this spring. before our time is out. Gen. Hooker is getting impatient at this inaction. There is some talk among the boys of re-enlisting, but I think I will go home, although I don't believe I shall be satisfied with home life as long as the war is going on." The anticipated battle was Chanecllorsville, through it he passed without a scratch, and was discharged at the end of his term of service with the following certificate. "This is to certify that Alonzo Philip Kratz was one of the most patriotic soldiers in Company F, (commanded by C. K. Frankenfield), always at his post performing a soldier's duty cheerfully, and I can recommend him as the bravest of the brave, in meeting the foe and daring in battle. T. J. Kline. Orderly Sergt., Co., F. V2S Pa.. Yol.

He came home in June 1868. and seemed glad enough to get back to "God's country again; but the outdoor life of a soldier, who so often slept with the blue vault of heaven for a covering, had completely changed his disposition. It was weeks before he could sleep on a soft bed, and enjoy a good meal. His patriotic spirit finally prevailed. to take up arms again; he always spoke of the Artillery service as being the most agreeable, and least dangerous to life and limb; that he would go in the heavy Artillery next. With this object in view, he went to Philadelphia shortly after New Years day, 1864, and enlisted in Battery D, 112 Regt., Penna. H. A. The regt. was, however, supplied with muskets, and served as the "2 Penna. Provisional Volunteers," there being more demand for that branch than Artillery: and he was promoted to Corporal of Company I. The regiment was mustered as "Veteran". and immediately went to the front leaving behind fifty brave and true men. of which number he was one for detached duty in Philadelphia. After guarding various places in the city for three months, he was sent to his regiment in the field, Apr. 24.

A letter dated July 8, 1864. near Petersburg, Ya., gives an account of the fierce fighting of the rebels at the Welden R. R.. where they charged the Union lines six deep without breaking it; also that they had blown up two rebel forts, and are mining another and a bigger one, and when ready to explode, they will tight day and night if necessary to capture Petersburg, Va. His last letter from the field, is dated July 17, 1864, in which he says, "have been acting as sergeant for two months, and expect to be promoted to that office, as soon as the captain recovers from wounds received in battle," The coveted promotion never came. He was captured July 29, at the explosion referred to (Burnside's mine), and carried away into captivity. He was confined in the famous Libby prison at Richmond. Va., for a while and then removed to the stockade pen at Danville, Va. The 'last letter'' received from him was written in the latter place, dated Aug 3d, 1864; it was mailed at Old Point Comfort, and did not reach home until October 19, 1864. It was written with a led pencil in two hand writings, the first half was in his writing, which gave the date and circumstances of his capture, and where he was a prisoner. The last half showed unmistakably, that it was erased and written in another hand; this purported to give the comfortable quarters he had, kind treatment he received at the hands of the rebels, and the quantity and quality of healthy food given him.