It sounds like it hasn't been rolled out to everyone yet, but it should be coming soon - AncestryDNA is (finally) adding the ability to change the estimated relationship range with a DNA match to a specific, known relationship instead. They're a few years behind 23andMe and FTDNA (although 23andMe still don't have shareable family trees so 23andMe is no better overall), but better late than never. 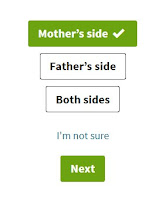 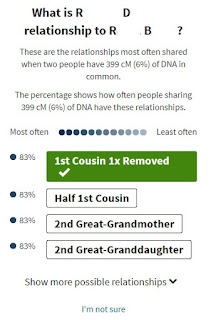 The other limitation is that it doesn't let you select more than one relationship, which is a complete oversight when it comes to lots of people who have endogamous branches of their tree, and identifiable endogamy (more than one set of most recent common ancestors) with many matches. Even when you select "Both Sides", it doesn't give you the option for more than one relationship. If it's a close match, assumes you've selected both sides because the person is someone like a niece or nephew, or full sibling, etc. Someone who shares your whole ancestry. If they aren't a close match, it seems to assume that although you may have two different relationships, they must be more distant than 5th cousins and only gives you the option to select "Distant Relationship". I suppose they're trying not to over complicate it for newcomers, but for people who use this for heavy research and breaking down brick walls in their tree, noting multiple relationships is vital.

It should also be noted that if one or more of your parents have tested, the system will automatically assign a match to your mother's side or father side depending on who they match. If for some reason, the system got it wrong, or only selected one when they actually match both, you can edit this by simply clicked the back button in the upper left corner of the side window (highlighted in yellow in the screenshot below). 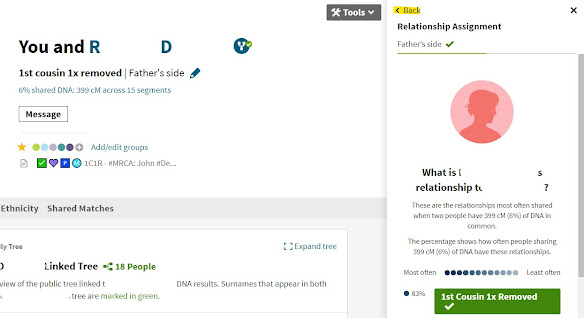 That pretty much sums it up. In general, it's great they finally added this option, I know lots of people have been asking for it for a while. And I have gone through and selected known relationships for all the matches I've identified. But you may notice I have, for a very long time now, always noted the relationship and shared ancestor(s) in the notes field (along with emojis I used before groups were available). Unfortunately, due to the limitations of the new feature, I will have to continue noting the relationship myself in the notes field instead of relying solely on Ancestry's tool.