So for those who haven't heard, FamilySearch is going to be discontinuing distributing of their microfilm come September 1, 2017. You can read their announcement of it here. This is because they are in the process of digitizing all their microfilm for online access and estimate they will be complete by the end of 2020. Of course, I hugely appreciate the massive undertaking of scanning so many records from microfilm and making them available for free, the contribution their organization has made to the genealogy community is outstanding, but it is still disappointing to know there is going to be an almost 3 year downtime in which many records won't be accessible at all. That's assuming their projection is correct and they complete everything by the end of 2020. Hopefully, it does not take longer than expected.

According to FamilySearch, they have 2.4 million microfilms at the Family History Library in Salt Lake City, and they have so far digitized 1.5 million of those. That means there is still almost a million more films (37.5%) which need to be scanned. Granted, they have prioritized those which are most frequently ordered and already digitized them, but there are probably thousands (millions?) of people out there who need access to those roughly 900,000 films still not scanned, who will no longer have it for the next 2-3 years. I am one of them, in the last 2 years I have order dozens of microfilm which not only was not digitized at the time, but remains still un-scanned today.

I am just surprised that they aren't waiting until everything, or at least close to everything is done before discontinuing it. They've only just passed the half way point of completion. I have seen arguments as to why they are discontinuing the microfilm service, and they all make sense for discontinuing it eventually, just not right now, before their scanning project is at least a little closer to being complete. It is certainly disappointing, but it's not like it's the first time I've been forced to wait years for access to certain records. Fingers crossed their timeline projection is accurate.
Posted by History Chick at 5:01 PM No comments:

Here's a tip many people may not know about. Newspapers typically reported the arrivals of ships, so if you're looking for more information on your ancestor's immigration, check newspapers.

For example, I had the passenger list for my ancestors, Giovantomaso Scioli and Lorenza Palladino, arrival in New York City on March 10, 1880, but frustratingly, the passenger list didn't mention the departure port or date. Wanting to know when and where their ship left from to get the full picture of their journey, I found NYC newspaper articles on March 10th and 11th, 1880, which told me not told me the ships departure details, but also that the ship made the journey on a disabled engine and hit a storm just before arrival!

That's probably a unique situation, but at the very least you should find a listing of ship arrivals with the details of its departure (example below). Sometimes, passenger names are even listed so if you're struggling to find any passenger list to begin with, you might want to try newspapers too (example below. 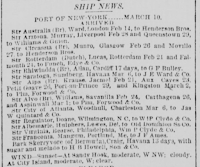 Posted by History Chick at 6:00 AM No comments:

How to get a Family Group Sheet on Ancestry.com 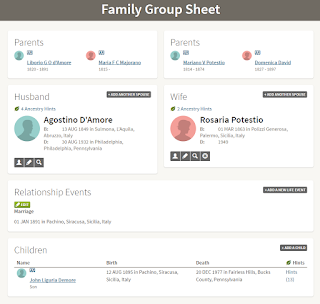 A couple years ago when Ancestry.com updated their website to the "new site design", the family group sheet feature disappeared. Staff promised it would return, but it never did. At least, not on the surface. There is a "backdoor" method to pull up a family group sheet of anyone in your tree. Here's how it works.

Use the following URL, replacing "TREEID" and "PERSONID" with the corresponding numbers from the URL of your tree/the profile of the person you want to make a family group sheet for: https://www.ancestry.com/family-tree/tree/TREEID/family/familygroup?fpid=PERSONID

How do you find the tree ID and person ID numbers from your tree? Just open the profile of the person you want, and they can be found in the URL. So, for example, this is the URL from someone my public tree: https://www.ancestry.com/family-tree/person/tree/110310542/person/340080162048/facts

Here's a quick reference image, for future use: