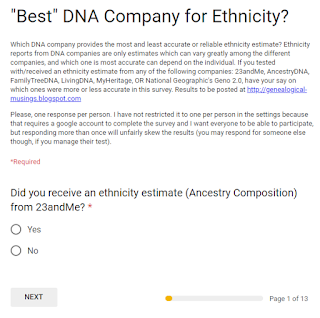 It frequently gets asked which DNA company is the "best", especially based on the ethnicity report alone. It's important to know that the ethnicity report is only ever an estimate, and they can vary greatly among the different companies, but which one is more accurate can also depend on the individual. ISOGG rate 23andMe the highest for ethnicity accuracy, and Nat Geo the lowest, but they don't include LivingDNA in that comparison, and I know from social media, not everyone feels the same way about each company. So I was curious to see what the majority would say if given a survey (if there even is a majority).

Well, here it is. If you've tested with even one of the companies included in the survey (23andMe, AncestryDNA, FamilyTreeDNA, LivingDNA, MyHeritage, and Nat Geo's Geno 2.0) please consider contributing your findings, it will only take a few moments (there are a max of only 13 quick questions, fewer if you haven't tested with every company - it merely asks "have you tested with this company?" and if you answer yes, it asks how accurate you felt the results were): "Best" DNA Company for Ethnicity Survey

Results will be posted once there's enough data collected.
Posted by History Chick at 8:28 AM 4 comments:

Recently, 23andMe rolled out 120+ new regions in their ethnicity report (Ancestry Composition), but they are actually sub-regions that don't include a percentage (they also aren't included in Chromosome Painting). They are calculated much the same way Genetic Communities at AncestryDNA are, which begs for a comparison.

My initial feelings on 23andMe's new sub-regions are that although they have fewer of them than AncestryDNA's 300+ Genetic Communities, it does seem as though one is more likely to get sub-regions at 23andMe than they would be to get GC's from AncestryDNA. 23andMe correctly identified that my "British & Irish" results are actually from the UK, and my Scandinavian results are from Norway. I also have a sub-region of "Italy" under my existing "Italian" results (see left) - that probably sounds rather obvious, but when you look at the list of all sub-regions, you see that there's also an available sub-region of Malta listed under "Italian" - so once again, they've correctly identified my Italian ancestry and not mistaken it for Maltese.

Meanwhile, over at AncestryDNA, I have zero Genetic Communities in Europe (I have one for Pennsylvania Settlers though) - see the screenshot to the right. My dad does get one for Southern Italy because he's half Italian, but no such luck for me. AncestryDNA offer 13 GC's in Great Britain, 17 in Scandinavia, and 14 in Europe South, but I get nada for any of them. 23andMe offer measly 2 sub-regions under British & Irish (UK and Ireland), and only 4 in Scandinavia, but since I actually got sub-region results, I can't complain. AncestryDNA may have more sub-regions, but if there's fewer people getting results in them, then they aren't as useful. 23andMe have certainly just raised the bar a little bit.

It is a little bit of a shame 23andMe weren't able to identify my German ancestry, separate from France and other sub-regions in this group. So far, LivingDNA were the only ones to accurately accomplish this, and it was with percentages.

If you click on "See all tested populations" at the bottom of your 23andMe Ancestry Composition, you'll be able to see that each sub-region, although having no percentage, does show how strongly you match that group with a 5 dot system (shown below). The more dots, the more strongly you match that population. Only if you have 2 or more dots does the group show up on your Ancestry Composition page, but when you click on "See all" you may find you match additional groups with only 1 dot. For example, I have 1 dot for Sweden, but I have no Swedish ancestry and because it's only 1 dot, it doesn't show on my Ancestry Composition unless I click "See all". My existing sub-regions for Italy, United Kingdom, and Norway each have 2 dots, which is why they all show up on my Ancestry Composition page.

You may note that none of your 23andMe percentages have changed, that's because the new regions don't include a percentage. They are calculated differently from the ethnic percentages and use a different reference database. Also, don't assume that having results in a sub-region means they are saying the entire percentage from the parent region is coming from that sub-region. In my case, it's true because I know my family history, but for example, if I also had Irish heritage, the results aren't saying all 17.2% British & Irish is coming from the UK, it could also be coming from Ireland, I just didn't get results for that. I don't actually have Irish ancestry that's not Scots-Irish though.

You may have also noticed that the names of a few populations have changed. This is simply to better reflect the areas they cover, it does not mean the data has changed. Instead of "Middle Eastern" it is now "Western Asian" and "North African" is now "North African & Arabian". What was "Central & South African" is now being called "African Hunter Gatherer" (I'm not entirely sure that's a better description for the newcomers to DNA). Also, "Oceanian" is now called "Melanesian". Originally "Mongolian" is now "Manchurian & Mongolian", and "Yakut" is now "Siberian". Additionally, they appear to have removed the parent categories that once showed the accumulative percentages of some sub-continental regions. For example, it used to group my Northwest European results together - so added up (British & Irish, French & German, Scandinavian, and Broadly NW European) it was 63.3% (show left). That's hasn't changed, if you add up those groups, it's still the same percentage, they are simply no longer showing it so I have to add them up myself. Not a huge loss, but a bit of a shame that I can no longer easily see the divide between my North and South European DNA (which has always been very distinctive).

You can also view a list of populations available from each DNA company here and see how 23andMe compares with other companies.
Posted by History Chick at 8:40 AM 1 comment: