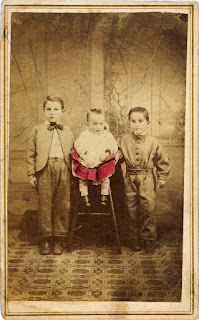 A carte de visite from my own collection, featuring one of my ancestors. I am fortunate to know who these children are, from left to right are brothers John Henry "Harry" Fallows (b. 1862), George Fallows (b. 1867), and William Fallows (b. 1863).

Many of you may already be familiar with the fact that boys under a certain age were typically clothed in dresses in history. They were usually "breeched" (began wearing breeches/trousers) anywhere from age 2 to 8. So the fact that George is in a dress here is not unusual and does not mean he must be a girl. Even the pink tinting of the skirt is not proof of gender. The main way to tell girls from boys when boys are still in skirts is the hair part. Girls parted their hair in the middle, boys on the side. Here, although George doesn't have much hair, you can see an attempt to part it on the side, certainly not in the middle. More importantly, the Fallows boys had no sisters.

The trouble with photos of children is that their clothing tends to be difficult to date. Men and children's clothing generally changed much less drastically and quickly than women's clothing did. The upside to photos of children is that because they grow so quickly, it's usually fairly easy to judge their approximate age. I'm estimating Harry is about 6 years old here, George is around a year, and William is about 5. That would be consistent with this photograph being taken approximately 1868. Certainly, it can't be before 1867, and most probably it isn't later than 1869.

In addition to the ages, there are other elements that tell us a lot about the time period, which may help when your photos aren't labelled. The tinting or coloring was most popular in the 1860s. Although that doesn't narrow it down much here, it may for other photos so it's worth mentioning. The borders are very noteworthy; the use of one thin inner line and one thick outer line was seen from 1864 to 1872. The lack of a tax stamp also suggests it's from after 1866 (from August 1864 until August 1866, photographs were taxed to help pay for the civil war - of course it could also be from before 1864, but given everything else, that's unlikely in this case). The plain background and square corners make it most likely pre-1870. All of that fits with this being from circa 1868.

Another dating aid is the size of the card and the image on the card. While the size of the card itself didn't change much (carte de visites are normally around 2 3/8" x 4 1/4" and only varied by about 1/4"), mine is 2 1/2" x 4" and in the book '19th Century Card Photos KwikGuide' it tells us this exact size came into use in the late 1860s. According to Phototree, image sizes started out small and continued to get larger over time until they filled the whole card and were finally superseded by larger cabinet cards. Phototree says the following:

The trouble with this is that my image size is about 2 1/4" x 3 5/8". I'm assuming Phototree is going by width, but even so there's no listing for 2 1/4", yet it does not completely fill the card. I don't know why Phototree doesn't have details on this size, but given that image sizes got larger as time went on, I'm guessing this size was found in the late 1860s or early 1870s.

The only thing perhaps not consistent with this being around 1868 is the fact that the back of it is blank. In '19th Century Card Photos' it says carte de visites with blank backs were typical of 1858-1861. There must have been some photographers who didn't imprint the backs of their cards later on too, because all the other elements suggest late 1860s. I would imagine that having your cards imprinted may have been more expensive for the photographer so some may have opted not to include it, regardless of the time period.
Posted by History Chick at 3:36 PM No comments: