As some people may know from my previous posts, My results regarding my Northern European make up have been all over the place. AncestryDNA says 55% British while FTDNA says it's 0% and 23andMe say 16.7%. Results for Scandinavian (Norwegian, in my case) and "German" (called Europe West, Western & Central Europe, or French & German depending on the company but knowing my tree the way I do, I know for me this is my German heritage) are just as varied. I have made some speculation on this before, that I think the reasons for the discrepancies had partly to do with differences in the way the companies were defining categories and regions, and partly to do with the fact that for some people, their British and Scandinavian/German DNA are simply too similar to tell apart.


Recently though, I had an epiphany which just solidified that there are consistencies across all the companies. It still doesn't tell me a more definite break down of my Northern European DNA, but it occurred to me that if I added up all my Northern European results, every company said the exact same thing: 63% Northern European (shown in images). And since I know that the rest of my ancestry is Italian, that means I'm 37% Italian, which is very close to what they all said as well (the range across the companies was 28-37% so it's at the higher end of that). All this reassured me that these companies aren't just plucking numbers out of the air, or that it's not that the science isn't precise enough to get any kind of reliable or consistent results. In fact, there is a huge amount of consistency among all three companies, we just can't always expect there to be a more specific break down beyond "Northern European" or other more broad regions that testers might be struggling to narrow down further. That might be a disappointing answer to some people but at least what I can take away from it is knowing there is a distinct difference between my Northern and Southern European DNA and that because of this, I can get a very precise percentage on my Italian DNA.

Something else to consider is the estimated percentage range that AncestryDNA provide. I really wish other companies would do something like this. 23andMe take a different approach by having categories for "Broadly" regions, which is basically admitting they can't narrow it down any further. FTDNA don't offer either option, which can be misleading for those who don't understand how complex this can be.

But if I consider my AncestryDNA percentage ranges in comparison to the other companies, I might see some more consistencies.

So let's assume that because my British results are so much lower with FTDNA and 23andMe, that it's actually the lowest percentage which AncestryDNA gives me: 36%. The highest results for German with AncestryDNA is not far off of what the other two companies estimate so we'll go with 20%. To make 63%, that leaves Scandinavian with 7%, which makes sense because it's within the small range AncestryDNA estimated for Scandinavian and not far off the percentage 23andMe gave.

So, all things considered, I may be:

It also all makes sense regarding my family tree as well. I have one grandparent who was Italian so on paper I would be 25% Italian. Since we actually inherit ethnicities randomly, 37% is realistically not far from that. I also had one great grandparent who was Norwegian, making me 12.5% Scandinavian and 7% is not too dissimilar. As for British and German, it would have been impossible to calculate since I have so many branches of both of them (it's safe to say most of my branches are British or German), many dating back to colonial times. But knowing that of the most recent immigrants, I had one German 3rd great grandparent and two British 3rd great grandparents, it makes perfect sense that my British results (36%) would be a little higher than German (20%), but not by too much.

It's probably not a very scientific way to determine your percentage break down! But there's some sense to it and it's better than just saying 63% Northern European.
Posted by History Chick at 5:06 PM No comments:

I see a lot of people criticizing Ancestry.com for a lot of things. I will readily admit when they are doing something wrong or when there is a problem they have not fixed (see my posts about things actually wrong with ACOM). But there are equally times when people seem to have inaccurate ideas of Ancestry.com so I thought it might be beneficial to dis-spell some of these myths.

Today's myth I came across was someone claiming that you can't sign up for a free account at Ancestry.com without doing the 14 day free trial, which makes you jump through hoops to unsubscribe and not get charged at the end of the trial. I won't deny ACOM gets a lot of complaints from people who signed up for the free trial and cancelled on the day the trial ended but wound up getting charged anyway. This does happen and it's recommended you cancel a few days before the trial ends to avoid this.

However, it's NOT true that you can't sign up for a free account at Ancestry.com without doing the free trial. Here's how. 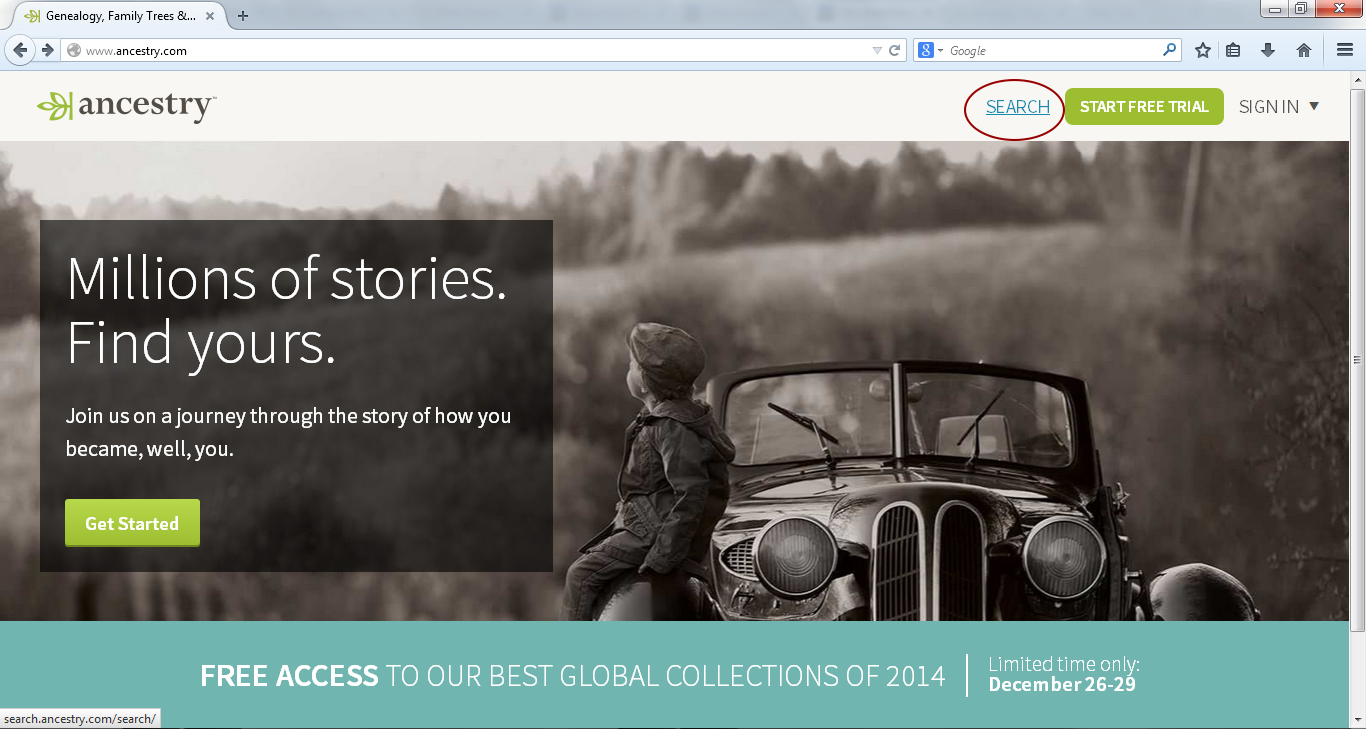 Step 1: On the home page, click on "Search", NOT the "Start Free Trial" button (shown above). 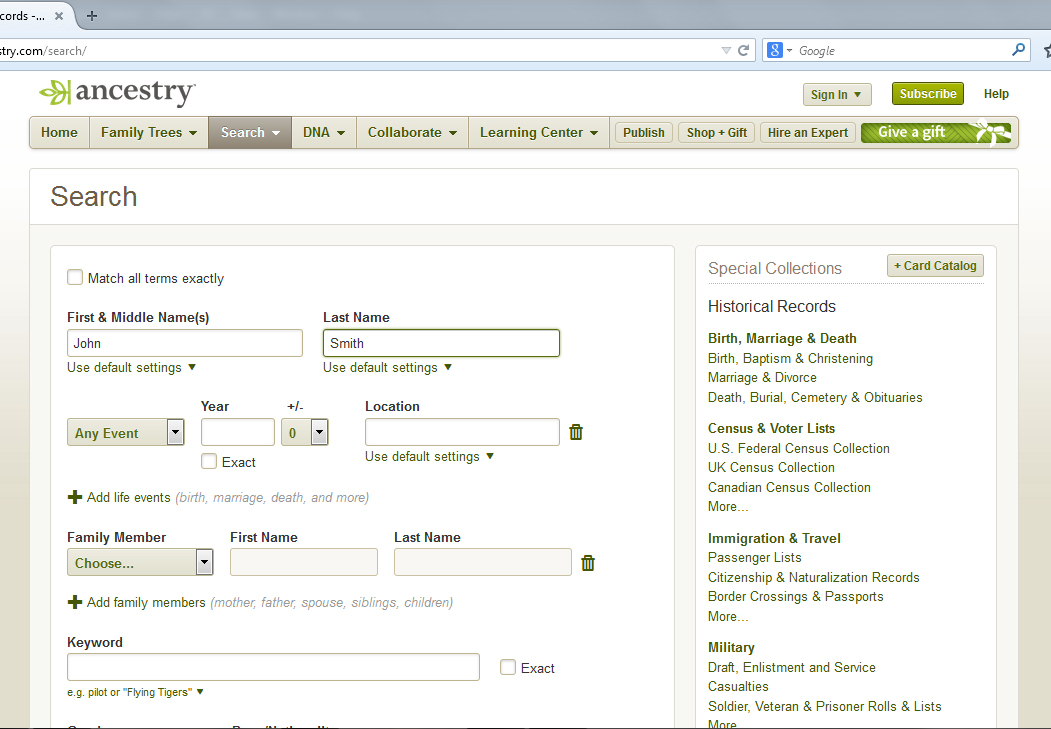 Step 2: Type a name into the search fields, John Smith will do fine. No need to put dates or places into the fields (shown above). 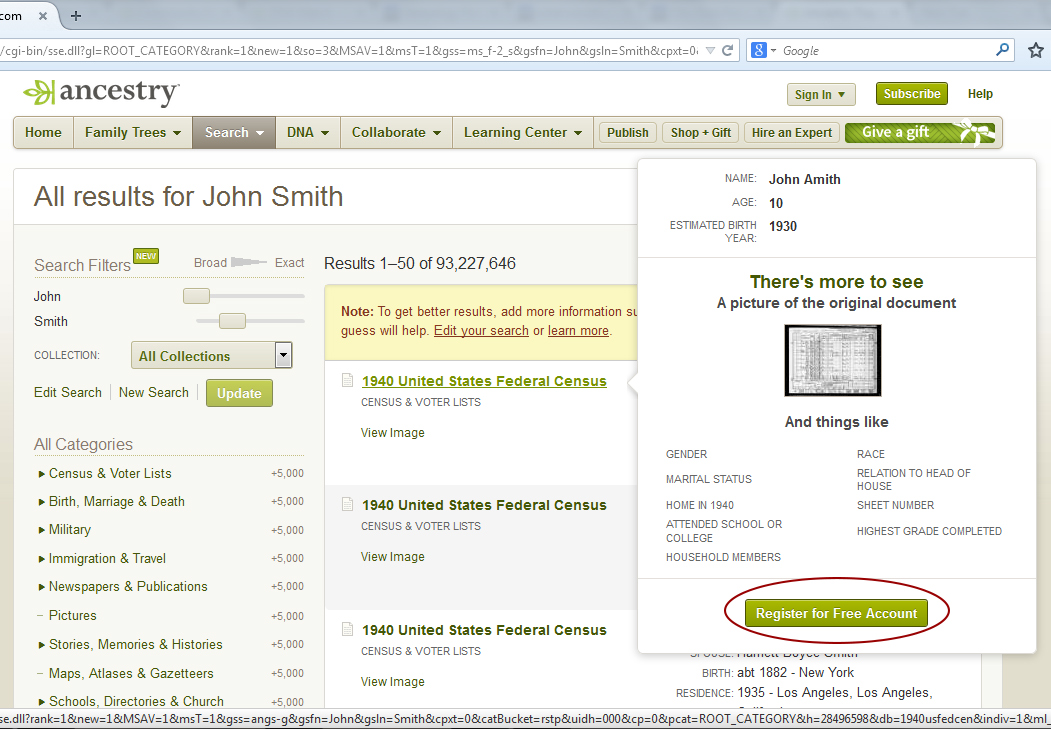 Step 3: The search results will be listed and if you click on any of the 1940 Census results (or hover over any of them and click on "Register for a Free Account" in the pop up window - shown above), it will prompt you to create a new account (shown below). 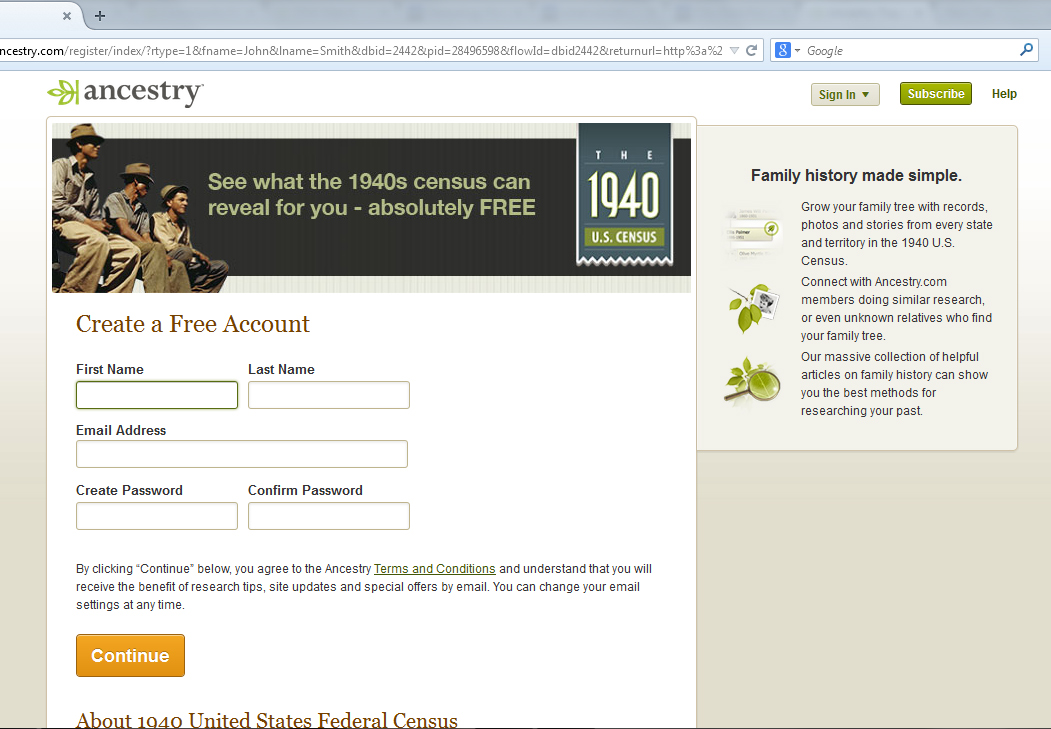 Step 4: Fill out your name, email, and a password to get instant access to free collections at Ancestry.com, no free trial, no credit card necessary, no strings attached. Below is a screen shot of the example record I can now view with my new free account, created without any credit card. 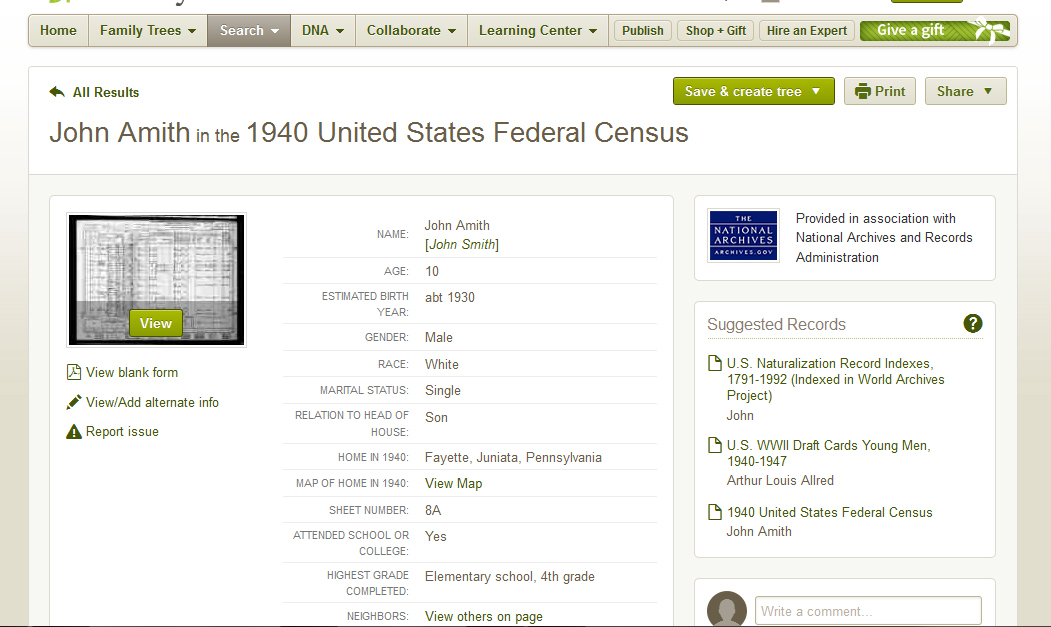 Granted, keep in mind that the free collections are few compared to their total database, but Ancestry.com frequently provide all or certain collections available for free for a limited time. At the moment, they are making their entire database available for free from December 26-29, which is what prompted the complaint that you can't make use of it without going through the free trial, but now you know that isn't true, you can take advantage of all their free offers from time to time.
Posted by History Chick at 3:47 PM 3 comments:

It's basically a beginners guide though, so probably won't benefit the more seasoned of Ancestry.com users but you never know, it's worth a look.
Posted by History Chick at 1:51 PM 1 comment: