How Copying Errors Can Really Screw Up ThruLines 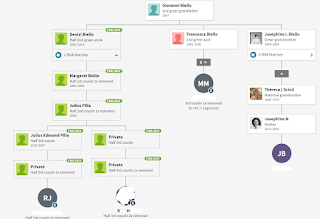 I want to illustrate how ThruLines is only as reliable as the family trees it's using, and how even if you appear to have a few DNA matches linking you both to the same ancestor, that doesn't make it accurate. As we know, it's common for the inexperienced genealogist (of which there are many) to blindly copy data from other trees without verifying it. All it takes is a handful of people copying the same error for ThruLines to make a wrong connection that might seem accurate because there's more than one DNA match.

My dad (JB, shown above) is a DNA match with two people, RJ and RH (you can ignore MM in the screenshot above, that's a legitimate connection I've verified). ThruLines suggests that they are both connected to my dad via his ancestor, Giovanni Biello. It does not include Giovanni's wife, so these are allegedly half cousins, but to my knowledge, Giovanni was only married once. I was open minded to the idea I might have missed another marriage, but then I noticed something else.

RJ and RH both descend from someone named Denizi Biello, b. Feb 1862 (according to the 1900 US Census), supposedly the son of my ancestor Giovanni Biello, b. 13 Jul 1847. This would mean Giovanni was only 14 when Denizi was born, which might be biologically possible but it's extremely unlikely. Men didn't marry until they were old enough to support a family, which they would not be at 14, and if they had children out of wedlock, the child was often left at the church as a foundling (meaning the father not identified). So something about this just didn't sound right to me.

Yet, 4 people had added Denizi as the son of this Giovanni to their tree. And in their defense, Denizi's death certificate does indeed say his father was Giovanni Biello and his mother Domenica Scioli.

Digging through the civil records of Monteroduni, Italy where both men were born, I found Denizi's birth records which finally held the answer. For starters, his original name was Dionisio Biello, and he was actually born several years before 1862, on February 2, 1856. But his parents names were correct: Giovanni Biello and Domenica Scioli. Only, Giovanni was not born anywhere near 1847. He was recorded as aged 38, which would make him born about 1818. It also said Giovanni was the son of the late Dionisio, whereas "my" Giovanni Biello was the son of Lorenzo.

So, two completely different men, as I suspected. I do not know who originally made the wrong assumption that Denizi was the son of "my" Giovanni but then 3 other people copied the error, ThruLines picked up on it and then found two people descended from Denizi. Since there were only 4 tree with the same error, I contacted all of them to let them know - hopefully they'll make the change and the incorrect ThruLines will disappear, but imagine if this error had been copied by more than 3 people! It probably wouldn't have been worth sending a message to each one since many likely wouldn't get the message or make the correction.

Granted, I have to admit that Monteroduni is a small town in rural Italy where there is a ton of endogamy and cousin marriages. I'm pretty sure everyone with ancestry in Monteroduni is related to everyone else there in some way, but it's still important to figure out the correct relationships whenever possible. Biello is actually a very rare surname and given that and the same location, our Biello lines probably intersect at some point, it's just a question of whether it's before or after civil records began in 1809. I'll certainly keep looking.
Posted by History Chick at 5:05 PM No comments:

I'll start with what DNA Circles used to do.

DNA Circles would first look for a group of people who mostly all shared DNA with each other. So let's say you shared DNA with A, B, and C and on top of that, A, B, and C all shared DNA with each other too. In addition, you did not share DNA with another person called D, but D did shared DNA with A, B, and C, and so was included in the group. So not everyone in the group had to match every single other person, but had to match enough people in the group to justify including them. Once this DNA group (or circle) was established, the system would then look for a common ancestor among your trees - and only among the trees of the people in the group. Once the common ancestor was identified, people in the group who didn't have this ancestor in their tree yet (or didn't even have a tree to begin with) would get DNA Circles in the form of "New Ancestor Discoveries". Within the tools of DNA Circles, you could see who all was in the group and who shared DNA (and who didn't) with whoever else (see above right). (Note: I think the minimum for a Circle to be created was 7 people not too closely related to each other, not 5 like the example I'm using, but I reduced it for the sake of ease).

So, DNA Circles was primarily looking at the shared group DNA and only using trees to identify the source of all that shared DNA (which is actually much how Genetic Communities work too, but I digress).

ThruLines works sort of in the completely opposite way.

ThruLines looks for a common ancestor between you and an individual DNA match by looking at the entire database of (searchable) family trees. This is something DNA Circles didn't do, because it only looked at the trees of those in the Circle. So ThruLines is taking match A and looking for a common ancestor by trying to compile all the data from available trees (not just the tree of you and match A). It does this for each DNA match individually, so it then separately finds match B and C are also supposedly descended from the same ancestor and it groups A, B, and C based on what the trees say is their shared ancestor, regardless of whether these matches also share DNA with each other or not (and it doesn't even tell you if they do or not). ThruLines does not check to see if A, B, and C also share DNA with each other like DNA Circles did, and it doesn't even involve D because you don't match D. You can sometimes check to see if they share DNA with each other yourself by using the Shared Matches feature, but remember only estimated 4th cousins or closer are included in the Shared Matches list. If you share less than 20 cM with A, B, and C, you can't see whether they share DNA with each other or not.

What does this mean? It means that beyond the fact that ThruLines is only looking for tree connections with your DNA matches, DNA really isn't a part of ThruLines. The groupings are not based on DNA like DNA Circles were because ThruLines doesn't even know, much less show you if the people in the group share DNA with the others in the group or not. Knowing which of your matches also match each other is important for establishing a connection to an ancestor because remember, family trees are fallible and you can't rely on them alone, especially when there's also no known paper trail to confirm it. You need those DNA groups/circles to tie those alleged descendants together and confirm what the trees say, but ThruLines doesn't do this.

Another thing ThruLines doesn't do, because it's primarily working off trees instead of primarily working off DNA like Circles did, is provide you with Circles, or New Ancestor Discoveries, even if you don't have a tree attached to your test results (shown right). Because ThruLines is working off trees, it needs a starting point in your tree to connect it to other people's trees. Without at least a basic tree with your parents in it (and ideally they want at least 4 generations), you will not get any ThruLines at all. But because DNA Circles was firstly looking at groups of shared DNA, it didn't matter what your tree said or whether you even had a tree, it could tell you that you fit into that established DNA group based purely on DNA. While ThruLines does include "Potential Ancestors" not yet in your tree, this is again based on what trees say and you will not get any if you don't have a tree attached to your results. This is a drawback for adoptees and people looking for unknown biological family since they have no biological tree to add.

Hopefully that helps clarify the main differences between these two tools. They are/were both useful in their own ways, but they are different and understanding their differences is important so you're not making assumptions about ThruLines and letting it lead you astray.
Posted by History Chick at 4:23 PM No comments: