Not too long ago, the Italian Archives website, Antenati, or "Ancestors Portal" got a face lift. At first, everyone raved about what an improvement it was, and admittedly, the ability to find and navigate to the records you're looking for has been a great improvement. Unfortunately, it has come at the cost of the Archives no longer supplying an inherent way to download full resolution images, which means we can't save copies of the records for our personal reference. We can take a screenshot, but to get the whole document, it will be too small to read. And if we zoom in to take a screenshot, we won't get the full document.

There is a way around this - but it's basically a hack, and who knows if it will remain available forever. It's also complicated and includes several steps involving the html code. But if you're brave enough, here's how to do it:

Step 1: Navigate to the image you wish to download, and click the icon with 3 horizontal lines located in the upper left corner of the image viewer window (see screenshot below, the icon is highlighted in yellow, click to enlarge). 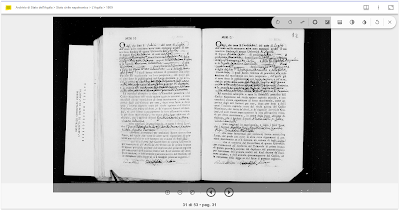 Step 2: This will bring up a side bar on the left with information. Note the page number listed here (highlighted in yellow in screenshot below), because you'll need that later. 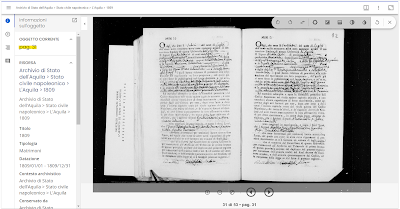 Step 3: Scroll down the side bar to the bottom where you'll see a link just below where it says "IIIF manifest". Click the link (highlighted in yellow in the screenshot below). 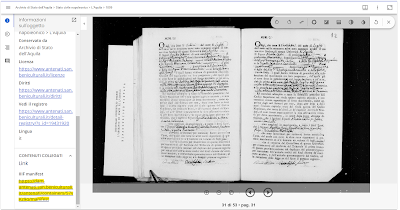 Step 4: Here's where it gets tricky. The link opens a page with a bunch of html coding. Different browsers seem to display it differently - if you're lucky, it will be organized with nested lines and different colors, making it easier to find what you're looking for, and the URLs will be clickable links. If you're unlucky like me, you'll see a big long block of text/coding with no links, no colors (shown below). What you're look for first is the page number you took note of in step 2. In the code, it will say "label":"pag. 31" (or whichever page number you're looking for). If you're having trouble finding it, you can use your browser's "Find" or "Find in Page" option to search for it (the screenshot below shows the page number 31 highlighted because I searched for it).

Step 5: Look just above your page number in the code for a URL that looks like this: https://iiif-antenati.san.beniculturali.it/iiif/2/wrZgxjz/full/full/0/default.jpg (URL is highlighted in grey and shows relation to the page number in the screenshot below) - the part that says "wrZgxjz" in my URL will be different for you. That's okay, that's what you want. That's the specific image code you're looking for. Copy and paste the whole URL (or click on it if it's clickable) into a new browser tab. 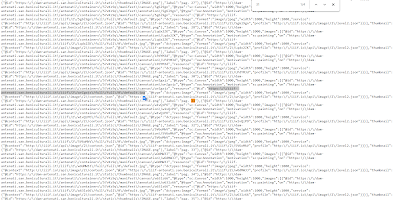 Step 7: Once you get the correct image to load, you can right click it and save the full resolution image.

Although the new site might be faster and easier to navigate, the inability to save crucial documents (which you'd think was the entire purpose of the site) is a huge step backwards. This hack is cumbersome, but for now, it's the only option. Good luck.

Outlander and the Development of Surnames 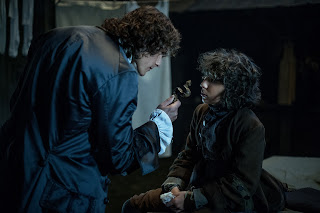 For the record, I have never read the Outlander book series, but I have watched the TV show, and as a genealogist, there was one scene in particular about surnames that struck me as hugely unrealistic. It was the suggestion that a somewhat abandoned child never had a surname. There's a few reasons why this seems rather ridiculous to me.

This isn't really a spoiler, because it's not really a scene that's crucial to the plot, though I guess it's relevant to character development, I still don't consider it very important but other's might, so you've been warned, read at your own risk.

In the TV show, our male lead character, Jamie, comes across a young pickpocket, Claudel, while in Paris, who never knew who his parents were (his father was unknown, and his mother was probably one of the prostitutes at the brothel where he lives, but he's never been told which one). They have a conversation in which they both agree Claudel isn't a very good name, suggesting that it isn't a very strong or masculine name. Jamie recommends the name Fergus instead, and Claudel, now Fergus, agrees, and they return to Scotland with Fergus as Jamie's foster child. Fast forward to when Fergus is all grown up, now a young man marrying his sweetheart (who happens to be Jamie's step-daughter - it's best not to examine that too closely), and the officiant asks what his last name is. Everyone pauses as they remember he doesn't have a last name, before Jamie graciously steps in and gives Fergus his own surname, Fraser. It was a touching acknowledgement of their father/son relationship. While it's maybe understandable Fergus may not have been given a surname at birth (though even this is a stretch, more on that later), it doesn't make much sense that by this point in his life, he would not have developed an informal surname that he likely would have used on a marriage record.

Remember, at this point in history, there were no birth certificates and forms of identification. There were parish records, so there would have been a baptism record, but people didn't keep or travel with copies of their baptism record for identification. Names were more fluid and the concept of an official or legal name hadn't really developed yet. So even though no one gave him a surname at birth doesn't mean one wouldn't have developed over time. Claudel was probably a fairly common name in France at the time, and Paris was a big city, so there were likely other young boys named Claudel, and people would have needed a way to identify or distinguish them. If one of them didn't have a last name, they would have used a description, which would have then naturally been shortened overtime into a surname. Especially as Claudel/Fergus was a bit of a troublemaker, certainly, people would have been talking about him periodically, and needed a way to identify him.

The same would have happened in Scotland, if it never had a chance to happen in Paris, or if the names didn't follow him from France. There was likely more than one Fergus in the area of Scotland they lived in, so people would have identified him in the most obvious ways, probably either something like, "Jamie's ward", "Jamie's foster child", or "the French boy." Overtime, they likely would have gotten shortened to just "Ward", "Foster", or "French," and all three of them could have even been in use at the same time. Therefore, when asked what his surname was, he probably would have picked whichever one of the three he liked better, or was more common. When you think about it, these three names are all very real surnames in use today, and they sometimes come from situations exactly like this one.

But that fact doesn't have to have ruined the moment. A name like "Ward" or "Foster" kind of identifies one's undesirable origins (and a name like French among a bunch of Scots kind of does too), so it could have been a source of pain or embarrassment for Fergus, and Jamie still could have stepped in and said, "No, it's not Ward, it's Fraser."

Also, let's not forget how easy it was to change or make up a new name. Again, there were no birth certificates and remember how Claudel simply changed his name to Fergus just by deciding that's what he wanted to be called now? So, if he's able to just make up a new first name, there's no reason he couldn't have just made up a surname at the same time. I'm not saying he definitely would have done that, just that if his lack of a surname was a source of embarrassment for him, he could have just given himself a surname, and picked whatever he wanted. This idea that he could change his first name on a whim, but oh no, he's stuck without a surname his whole life until Jamie steps in to save the day, is a little bit silly.

And I'll even go so far as to say the fact that he didn't have a surname at birth was silly to begin with. Children born out of wedlock were typically given their mother's surname. Fergus didn't know who his mother was, which is weird to begin with, because she's supposedly the reason he was living at the brothel (so was he even actually "abandoned" to begin with if he was living with his mother?). I've been told that he had no surname because "nobody cared enough about him to give him a surname". But what about the fact that someone cared enough about him to let him live at the brothel that his mother worked at? Someone cared enough about him to feed and clothe him, a financial burden to them, when they didn't have to, when they could have dropped him off at an orphanage or foundling hospital (the first of which opened in Paris in 1670), which would have taken him in, and given him a surname. Foundlings were a common part of history, and they were given surnames by this point in time because by the 18th century, surnames had long been in full use in France and Western Europe. But that's not what happened. He was kept at the brothel, supposedly because someone wanted him there, probably his mother, so why would she not identify herself and give him her surname? Even if she died when he was an infant, someone else at the brothel must have cared enough to keep him there even when they didn't have to, and that person surely would have known who his mother was and told him, and therefore he would have used her name.

So it just doesn't make any sense that even an abandoned child in 18th century Western Europe would not have a surname to begin with, and that even if for some reason he didn't, that one wouldn't have developed out of a nickname over the course of his young life.

Posted by History Chick at 12:05 PM No comments: