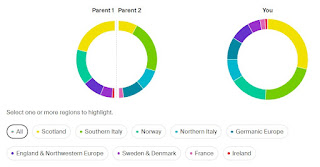 AncestryDNA is maintaining their annual ethnicity updates, and it's a little early this year. But it's a new kind of update - rather than the usual changes to either the reference panel, or algorithms, or both, this one introduces a new feature called SideView. It is essentially phasing our DNA with our DNA matches to determine which ethnicities come from one parent or the other. It also means adjustments to our individual percentages, which should theoretically be an improvement. Phasing is usually done with parents or other very close family members, so I was skeptical about AncestryDNA doing it with our more distant matches. Your parents don't have to have tested for this new feature to work, but I was hopeful that my parents having tested would make it more accurate.

I find the parental breakdown (shown above) is very reliable - at least, it's as reliable as it can be given how accurate (or not) each of my kits are to begin with. For example, it correctly identified that my Norwegian and Italian ancestry are from opposite sides of my tree, and that is true: Norwegian is on my mom's side, Italian is on my dad's side. But it puts all of my Germanic ancestry on my dad's side because my mom's results still don't include Germanic despite having a great grandfather of full German descent (dozens of DNA matches on this branch confirm there's no NPE) and several other German branches further back.

Looking at my mom's parental breakdown, shown above, (neither of her parents having tested), there is less reliability, that's partly due to the fact that her Norwegian ancestry is grossly exaggerated. She now gets a whopping 47% in Norway despite only having had one Norwegian (or Scandinavian) grandparent (so she should be about 25%, although it may vary, it shouldn't be more than about 36%). The majority of her Norwegian results does get put on one side, but that means there's not much room left for the other 25% on her mom's side that should be mostly English. Most of her English results get put on her other side, which isn't exactly wrong, she does have some English ancestry on that side too. But her dad's side should be mostly Germanic, and again, she gets no results in Germanic. If the percentages were more reliable to begin with, the split up would be more reliable too.

My dad's parental breakdown is very accurate, probably partly because his father tested but also because there is more genetic distinction between his mom and dad's sides - his mom was Italian, his dad mostly German and some Scottish and English. The split up (shown above) correctly shows all his Italian (Southern and Northern even though his ancestry is only Southern) plus trace amounts in Cyprus and Levant (obviously coming from his Italian ancestry) on one side, equaling exactly 50%. On the other side it correctly places all the rest of his ethnicities, although they are not all accurate - he wrongly gets results in Scandinavia where he has no known ancestry.

My paternal grandfather's parental breakdown is surprisingly very consistent with his tree, considering neither of his parents tested. On his paternal side, he is German with some English. On his maternal side, he's German and Scottish, with some English. Although his percentages are overall off (too much English, not enough German), the split up is accurately reflected here. English on both side, German on both sides (though barely), and Scottish on only one side.

My husband's parental breakdown (shown above) is also as accurate as possible given his percentage results and the fact that neither parent tested. It correctly identifies the majority of his Irish ancestry on one side and all of his English ancestry on the other side. His father was Irish, his mother was mostly English. He overall gets 40% in Ireland (a decrease from previous 47% which was much more accurate), and 36% is assigned to one side, his dad's side (shown below). His mother does have one Irish branch from much further back, which would amount to about 3%, and interestingly it puts 4% Ireland on his mom's side. Not bad. It then splits his Scottish results up more evenly on both sides - he does indeed have one Scottish 2nd great grandparent on his mother's side, so the Scottish portion being assigned to his father's side is obviously just due to the genetic overlap between Ireland and Scotland. His Scottish percentage is exaggerated to begin with: 22% when it should be more like 6% and probably no more than 12%, but interestingly the amount that is put on his mom's side is 9%, which is consistent with the Scottish 2nd great grandfather on his mom's side. Again, not bad, AncestryDNA, not bad. However, he has no Welsh or Norwegian ancestry, so those are obviously coming from genetic overlap with England. 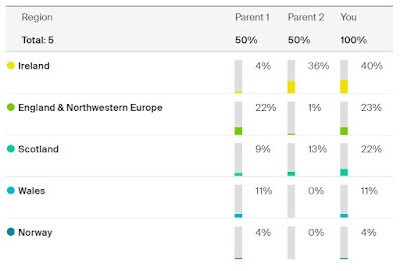 So overall, the split ups among most of my kits were very reliable, but I can't say the percentages have benefited from the phasing. For example, my Scottish results wrongly shot up from 12% to 29% - based on my tree, the former is more accurate. And as mentioned, my mom is still lacking any Germanic results at all when she should be at least 12%, while her Norwegian results were already too high to begin with (43%) and just went up even more (47%). My dad's results didn't change by much, but he's now getting small percentages in incorrect regions that he didn't get before. In fact, most of my kits have seen this too - most of them now have small percentages in Ireland which they didn't have before. To my knowledge, all of my so-called "Irish" ancestors were actually Scots-Irish. So previous results were more accurate and the sudden appearance of Irish in results is disappointing (only because it's not accurate, not because there's anything wrong with being Irish, lol - obviously, my husband is half Irish).