What it really meant was that the person did not get off the ship. As mentioned, that could be because the person died on board, or because they never got on board to begin with, it could also mean that the individual didn't get off the ship at that port of arrival but rather remained on board until disembarking at a secondary port of call. This was the case with some of my ancestors, who arrived in New York on January 28, 1914 on board the Taormina - their names are crossed off so they didn't got off the ship there. There is then a second passenger list from their arrival in Philadelphia a couple days later on January 30, 1914 where their names were not crossed off.


The ship had a record of who boarded at the departure port and then the immigration officers at the port of arrival made a copy of those lists, crossing off the people on their copy who didn't disembark at that port. The passenger lists we see are usually the copies that were made at the port of arrival from the ship's records. The immigration officers probably didn't care why an individual on the passenger list didn't disembark and therefore didn't always note whether it was due to an on-board death, or whether they were just carrying onto the next port of call, or whether they never boarded to begin with. Their job was probably just to record who disembarked at their port of call.

So if you see an ancestor or relative whose name is crossed off on a passenger list, don't assume they died on board, or never boarded to begin with. Do some more investigating to see if the ship carried onto another port of call where they might have disembarked. If you're not finding anything by searching for the person's name, try searching by the arrival year and the ship's name. The arrival port officers were working off of the ship's records, which meant the handwriting could sometimes be misinterpreted and copied incorrectly (this doesn't mean a misspelling was a permanent name change). And of course, there's always the digital transcription which could be incorrect too and preventing you from finding the record by the individual's name. This also works for when you may have gotten an individual's immigration data from a naturalization record but can't find the passenger list by searching by name. Of course, by the time of naturalization, the individual may have been misremembering the exact details of their immigration so if you don't find the passenger list by the arrival date and ship name, you may need to make use of wildcards in the name. You can use a '?' in place of a letter, or an '*' in place of several letters but you must have at least three real letters in there for it to work.

US Immigration Stats in History

I often see people trying to determine which European ethnicity most Americans are descended from. Some attempt to use self reported ancestry from census data to show the major European groups Americans today claim to descend from. The trouble with this is that self reported data is unreliable and most Americans are a mix of ancestries but only able to report one. Many actually reported 'American', which although technically may not be inaccurate (if you have ancestors born in the US, then you have American ancestry - the census did not ask what our non-American ancestry was), it's not helpful for these purposes. Probably because of these reasons, the US Census has since dropped this question and therefore the most recent data for ancestry is from 2000.

Others try to calculate which group most Americans today have roots in by using immigration numbers plus basic multiplication to determine their population growth. The trouble with this is that the multiplication is an estimate, and again, so many Americans today are a mixture of European ethnic groups. In the end, we can only say that it's impossible to determine with any real accuracy which single European ethnic group most Americans today are descended from. But the immigration stats are still helpful by showing us the largest European groups to legally settle in the US.

Over the course of history, from colonial times up to 1969, the largest groups to immigrate were the Germans totaling just over 7 million, followed by the British totaling over 5 million. The Italians came in a close third, also equally just over 5 million, with less than 100,000 fewer than the British numbers. Finally, we have the Irish amounting to slightly more than 4 and half million. Those from Austria-Hungary came in fifth at a little over 4 million, and then the Russians with just over 3 million. Finally, we have those from Norway-Sweden with barely over 2 million, and if you add in the Danes and Finnish to maximize the Scandinavian results, it still only equals about 2 and a half million. The spreadsheet (linked below) shows numbers for more groups in case it interests you but none of them exceed 1 million.

When estimating the amount of descends today from each of these groups, it's important to consider the time periods in which they immigrated. The longer an immigrant has been here, the more descendants they will likely have because they had more time to multiple. For example, the Italians may have had more immigrants than the Irish, but the largest period of Irish immigration occurred decades before the bulk of the Italians arrived so theoretically, it's possible the Irish have more descendants. Considering many Irish and Italians intermarried, it would not surprise me if they were about equal though.

With this in mind, if you look at the stats I compiled in this spreadsheet, you'll see that the Germans and British not only have the highest immigrant numbers in total, but also are the only groups to have been consistently immigrating in mass numbers since colonial times all the way up to 1969. I think it's safe to say that most Americans today have German and/or British ancestry. It would probably be impossible to determine which out of the two of them would rank higher, and many people probably also have some other groups mixed in there - personally I also have Italian and Norwegian, but not everyone else will. But it seems obvious from these stats that most Americans with European heritage have some German and/or British ancestry, even if they don't know it.

Posted by History Chick at 2:22 PM No comments:

Like me, you may have a collection of old photographs handed down to you with no knowledge of who the portraits are of, or even when they were taken. Here's a few tips to help you out.

There is an excellent and more advanced guide to print types available at PhotoTree.com.

I see a lot of misunderstandings about photography in history and perhaps dispelling them will also help people understand the time period in which a photo might have been taken.

Exposure times. Many people seem to think that in history, the length of time required to take or expose a photograph was so long, one wasn't able to smile or move. This was true in the very early days of photography, but not by the late 19th century. The first daguerreotypes and calotypes in the 1840s had exposure times as short as 5 minutes in optimal conditions but later their exposure times were reduced to only a few seconds by 1864 with the invention of the collodion process in 1851 followed by improvements on it which increased sensitivity to light. Granted, this was in optimal (bright sunlight) conditions, but I have photographs of small children starting from the 1860s (shown below), which wouldn't be possible without exposure times measured in seconds because we all know small children won't hold still very long (and I don't care what time period they were from, small children still had little patience or self control). By 1871, the gelatin dry plate method made exposure times short enough that cameras could be hand held (ie, fraction of a second).

By 1878, technology shortened exposure times to a fraction of a second, about 1/25th of a second. Have you ever seen "The Horse in Motion", a sequence of photographs of a horse and rider at a gallop, analyzing it's gait frame by frame (shown above)? That was done in 1878. Without getting too technical, anything that is fast enough to capture and freeze the motion of a galloping horse is more than fast enough to capture a smile or movement of a human being.

So why aren't there more photographs of people smiling or moving around from the late 19th century? It's probably due to the fact that until about 1885 or 1900 at the latest, photography was not affordable to the masses and the processing could be complex. Therefore, the industry was very much controlled by professional photographers and that meant that getting one's photograph taken was a formal event. The concept of the candid photograph didn't really exist yet, and people's only basis for a formal image of themselves stemmed from paintings, where there was no smiling or moving around. So the idea of this as a formal portrait carried over into photography until the advent of the candid photograph. There are examples of candids in the 1880s and 1890s, but it really took off in 1900 with the introduction of the Kodak Brownie, which practically anyone could afford. 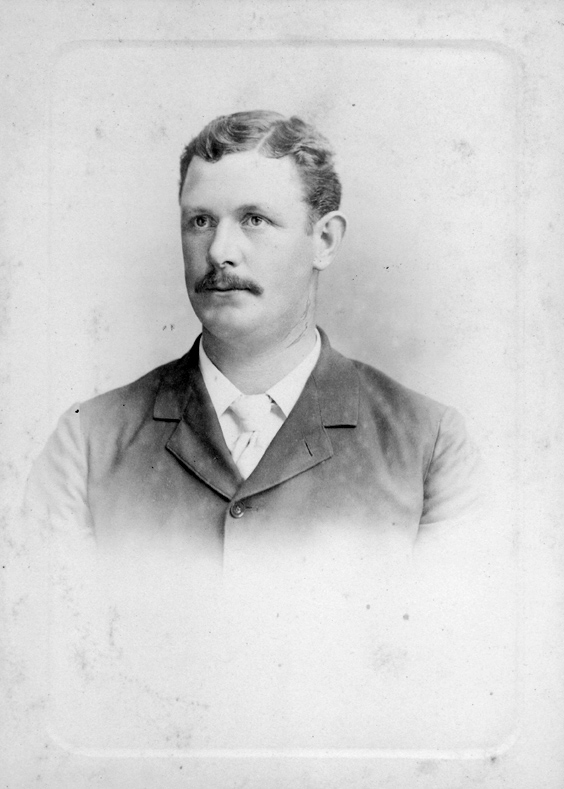 Detail. Many people also seem to think that pre-20th century, photographs didn't have much fine detail to them. And while it's true that many surviving photographs from the 19th century don't have much fine detail, that doesn't mean the technology didn't exist to capture it. Just look at some of the photographs of US presidents dating the 1850s and 1860s! While these were probably taken by some of the best photographers in the country, that doesn't mean such detail was exclusive to the best of the best photographers. Take for example the image to the right, which was likely from the 1870s or early 1880s. Note the fine detail in the strands of his hair and mustache.

Posted by History Chick at 2:55 PM No comments: