AncestryHealth Results are in! 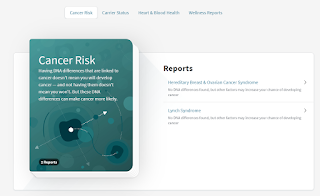 Recently, Ancestry.com announced the introduction of AncestryHealth, providing health and wellness reports for the first time. It costs $49 on top of the original DNA test price, and they are also offering a subscription (currently by invite only) that will include ongoing updates and new reports added in the future. This is very different to how other major testing companies offer health reports, subscriptions are not the norm and frankly I think it's a little cheeky from Ancestry, and I will not be paying the subscription.

But I did pay the one time fee for the current reports to see what they're like and the results are in. For people who tested particularly on the old v1 chip, your DNA has to be rerun through the lab because the raw data isn't ideal for the health reports they're offering, so it took a little bit of time for the results to come in. 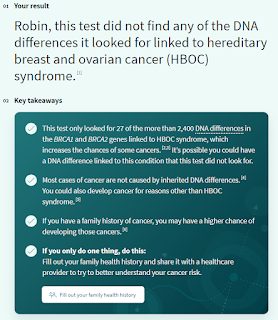 Under Cancer, there's currently only 2 reports: Hereditary Breast & Ovarian Cancer Syndrome, and Lynch Syndrome. They are careful to note that "No DNA differences found, but other factors may increase your chance of developing cancer." They also detail the fact that their test only includes 27 of the more than 2,400 DNA differences in the BRCA1/BRCA2 genes. None of the genealogy related DNA tests that offer health reports include all known SNPs associated with cancer (or any other given condition). The only consumer DNA test that does is Color. 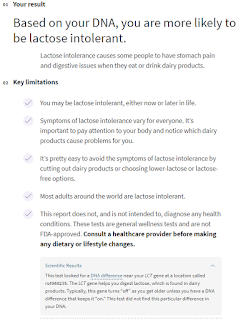 Unsurprisingly, there aren't many reports yet and it doesn't tell me very much, at least not much that I didn't already know. It was much the same when 23andMe first reintroduced their health reports too, the only difference is, 23andMe continue to update and add new reports at no extra cost whereas AncestryHealth are charging a subscription for it. I'm not really sure why Ancestry think that this will be competitive pricing, as it will be far more expensive for users in the long run. MyHeritage recently joined the health band wagon too, and like 23andMe, do not require a subscription for new reports.

So is AncestryHealth worth the extra $49? Right now, not really. Maybe in the future as they add more reports, it will become more useful but it's unclear if merely buying the test in the future will gain you those new reports that I can now only get if I subscribe. Seems silly to punish people for being early customers, but at the same time if AncestryHealth Core (the non-subscription) remains the way it is with only 13 reports, it will be a pretty pathetic health report. Ancestry haven't been very forthcoming with the details on the subscription though. Unless they decide to drop the subscription idea altogether, I doubt very much I'll ever recommend AncestryHealth at all. 23andMe provides much more information at a lower cost (in the long run), but remember, even 23andMe is not comprehensive. Even Promethease, with it's hundreds of reports, is not comprehensive because the raw DNA data it's working off of is not comprehensive and only includes a small portion of our full genetic profile.
Posted by History Chick at 3:40 PM No comments: