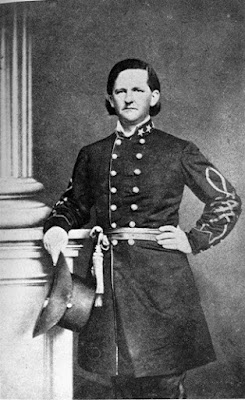 Sometimes, genealogy and modern politics have some overlap.

In Augusta, Georgia, a giant, imposing obelisk stands as a memorial to Confederate soldiers. In particular, it hosts four life-sized statues of infamous Confederate military leaders, Robert E. Lee, Stonewall Jackson, William H.T. Walker, and Thomas R.R. Cobb (shown left), the latter of which is my 2nd cousin 6 times removed. It's a distant relation, for sure, but a significant one, given why this monument was erected in 1878 by the Ladies Memorial Association of Augusta.

Let's be clear about one thing - statues, monuments, and memorials are built in honor, respect, and celebration of the people, places, or events they represent. Monuments like this one are made in memory and respect of men whose only or primary contribution to history was to lead armies in the name of slavery. And when monuments like this are inscribed with quotes like the following, that fact becomes impossible to deny:

"No nation rose so white and fair

None fell so pure of crime."

I'm not sure how anyone could say this is anything but blatantly racist, and this is the inscription found emblazoned under the feet of my cousin. That makes this a little bit personal for me - southerners like to shout about how this is their history, and their heritage. But for me, it literally is.

And I say, tear it down. 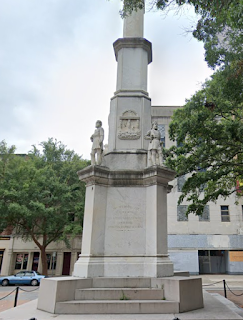 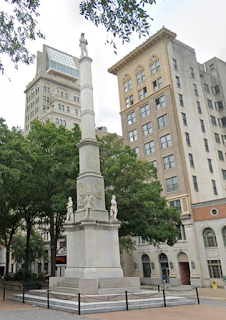 The removal of statues like this isn't the removal of history. History belongs in museums and history books, which there is no lack of. There are plenty of Civil War and Confederate artifacts and memorials to be found in museums, where people can study and learn from them, and this monument could be one of them instead of being revered in the middle of town. When a memorial is erected in honor and celebration of Confederate leaders, it's honoring and celebrating slavery and racism. By not only leaving such a monument standing, but actively refusing to remove it, the government is not-so-subtly condoning a symbol of racism. We would never tolerate a statue of Hitler standing proudly in the middle of a city, paying homage and reverence to him, so why do we allow it for Confederate leaders?

Even if we remove all the slavery and racism from such symbolism (which isn't really possible, but just for the sake of argument), you're still left with a monument honoring men who tried to tear our nation apart with war and violence. Are we now going to see statues of the leading faces among the rioters who broke into the Capitol Building? Because they too are talking about civil war, they too are waving the Confederate flag, and they too believe their violence to be "fair" and "pure of crime". In reality, they are traitors, and so were Confederate leaders. And actually, many (if not all) of the rioters are also proud racists, just like Confederate leaders, as proven by the presence of white supremacy groups and Neo Nazi symbolism during the Capitol riot. Confederate leaders were also unabashed racists. This direct quote from my own cousin, Thomas R.R. Cobb, a Confederate General, proves it:

"This inquiry into the physical, mental, and moral development of the negro [sic] race seems to point them clearly, as peculiarly fitted for a laborious class. The physical frame is capable of great and long-continued exertion. Their mental capacity renders them incapable of successful self-development, and yet adapts them for the direction of the wiser race. Their moral character renders them happy, peaceful, contented and cheerful in a status that would break the spirit and destroy the energies of the Caucasian or the native American."

None of this means that every statue of every historical figure who ever did anything unethical should be removed. Yes, I am aware of the fact that most of our founding fathers were slaveholders, and that's certainly something I don't think we should hide from - we should talk about it, and we should teach it in schools. Our founding fathers were flawed, and that's something we have to accept. But the difference is, statues of founding fathers were not constructed in honor of them being slaveholders, they were erected in honor of all their positive achievements. Statues of Confederate leaders are produced in honor of their fight for slavery, and supporting that in the name of "history" or "heritage" is, frankly, bullshit. It's not in the name of history, it's in the name of racism and hatred.

And if your heritage is racist, it's not something you should celebrate. Read about it in a history book, or visit a museum, or find something else about your heritage to celebrate that's not based on slavery, but do not protect a symbol of hate standing proudly in the middle of a city.

Shame on the Augusta, Georgia government, and shame on everyone who enables them.

Posted by History Chick at 11:08 AM No comments:

Small but Significant Changes at Ancestry.com

Ancestry is rolling out some new tweaks to their website that has everyone in a tizzy and I don't really know why, because in many ways they seem like an improvement to me.

One of the changes was the removal of the clickable alphabet at the top of our List of All People. It allowed us to jump to surnames that start with any letter by clicking on the letter. I know the removal of this seems like a negative, but it's really not. What remains are two name search fields, one for first name, the other for last name. They were always there, and they always offered the ability to do what the alphabet list offered too, which I imagine is why the alphabet was removed - there is no point in having two different tools that do the exact same thing. You can still jump to surnames starting with any letter by simply putting that letter into the surname search field. But even better than that, the search fields offers way more versatility than the alphabet did, because you can also do the same for the first name field (shown above), and you can use more than one letter, so you can quickly bring up all "Mc" or "Mac" surnames, for example (shown below). I believe this was always an option, a lot of people just apparently didn't realize it.

The bigger change is in hints, clicking on a hint now brings up a side bar to preview the hint (shown below) instead of it loading a whole new page. People are complaining that it requires more clicks to confirm and attach the hint now, but that's just not true. In the past, you had to click on the hint, it loaded a new page where you could review the record, then you clicked "yes" to the hint being correct and it loaded the page that allowed you to edit the data you're adding, then you click "save to your tree" and you were done. That's 3 clicks.

It's the same now. You click on the hint, but instead of it loading a new page, the side bar pops up. Instantly, I felt this was an improvement because you haven't left the person's profile page, so you can still fully view and compare all their data, and sources, etc. You can click on Facts, Gallery, etc and the side bar remains up, allowing for a full comparison (shown below). In the past, the only way to do this was to right click the hint and open it in a new tab, which you can still do, but now there's no need. I always did this, because I generally want to refer back to the profile while checking a hint. Now, finally, I don't have to open a new tab, which is going to make my workflow much more efficient.

Even if you didn't open the hint in a new tab in the past like me, the number of clicks is still the same. After clicking on the hint and the side bar popping up, you click "yes" to the hint being correct and it loads the page where you can edit the data you're adding, and then you click "save to your tree" just like before. That's 3 clicks.

So I'm really not sure what the fuss is all about. The changes either won't slow your workflow, or they will actually improve it. Give it a chance, you might find it works better.