Best Friends Forever? Not Quite. The Original Bride Wars.

In the early 20th century, two young ladies, Emma Sarah Fallows and May Melson Ellis, were the best of friends. They met at teaching school, attended as many social events together as possible, taught at the same elementary school, and even lived together during that time. They were inseparable. But in 1913, something suddenly happened to cause a split between them, and their friendship never recovered. What was it?

My great grandmother, Emma Sarah Godshall (nee Fallows), left a wealth of information and photos of herself behind. Her family was somewhat wealthy and could therefore easily afford what was probably a Kodak Brownie, which they used to take dozens of candid photos of their family and friends that survive today. They were also frequently mentioned in the society section of their local newspaper, the Ambler Gazette in Pennsylvania, for some of the most mundane sounding notices sometimes. I can't imagine who at the time would have been interested in knowing about every vacation they took, for example, but I'm glad they reported it because these are the little snippets of information that give me insight into my ancestor's lives in ways most people don't get. And it's these mentions that could explain why Emma and her best friend parted ways so abruptly.

In September of 1904, sixteen year old Emma and seventeen year old May arrived at Millersville Normal School in Pennsylvania, what was then a teaching school. Today, it's called Millersville University and offers degrees in many subjects. May being a year older than Emma may have been a second year student, but for Emma it would be her first time living apart from her parents in a place were she scarcely knew a soul. It must have been daunting, but Emma was an outgoing girl by all accounts, and probably made friends quickly. Although we don't know exactly when Emma and May met, we know they were good friends by the time Emma graduated in June of 1907. After this point, Emma is mentioned in the paper as spending time with May almost every month, and I suspect the lack of reports of Emma's friends before this only had to do with the graduation milestone (there are always fewer social reports of children with less details).


The girls quickly became practically inseparable. May was from Delmar, Delaware, and Emma was from Wyndmoor, Montgomery County, Pennsylvania, but that didn't stop them from regularly visiting each other and taking trips to the beach together. By 1910, they were living together with Emma's parents and working at the same elementary school in Wyndmoor.

In December of 1911, Emma became engaged to Chester Harold Godshall, better known as Harold, or just C.H. They had been dating since 1908, when the first mention of them spending time together at a card game Emma hosted can be found in March, and when Harold began showing up in photos with Emma (clearly as a couple) sometime in spring or summer (they were on the beach at Ocean City, Maryland). Also featured in many of these photos are May and her beau, Boyd Morse Frymire. The four of them were tight, frequently taking trips together to places like Valley Forge and Ocean City, Maryland, and taking pictures of their memories along the way. Emma described them as "The Bunch" at one point. Boyd and Harold were both Civil Engineers and graduates of Bucknell University, so it's likely they were friends before meeting the girls. Maybe Emma and Harold introduced May to Boyd, or the other way around. 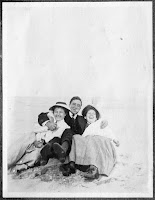 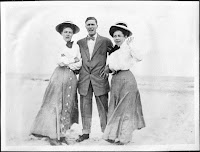 On May 31, 1913, Emma took a break from planning her wedding, scheduled for November 11 of that year, to visit her best friend in Delmar for a house party May was hosting for several of her friends. She must have been excited to tell her friend all about her wedding plans, but Emma was about to receive a shock. Something changed in their friendship right around this time, and I believe it happened at this house party, because this is the last ever mention of the girls spending time together. They did not even attend each other's weddings, let alone stand by as each other's maid/matron of honor.

Coincidentally, only a few short days after the house party, May's parents announced her engagement to Boyd at a dinner party on June 3, probably attended by May's parent's friends this time. The next day, the announcement appeared in a Wilmington, Delaware newspaper. It seems likely that the house party May hosted for her friends was to announce to them her engagement to Boyd, and it seems significant that it coincided with the termination of her friendship with Emma. 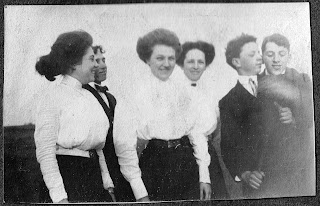 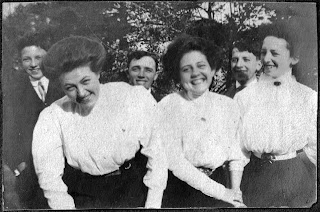 Emma and May (with friends) "At Fretz's" place (Florence Fretz, Emma's Maid of Honor). Top: May (far left), Emma (second from left). Bottom: Emma (far left), and May (middle). Florence may be the other woman in the photos, or may be taking the photo.

But why would May announcing her engagement to Boyd cause the end of her friendship with Emma? It's unlikely Emma didn't approve of May's choice in Boyd because there are many photos of them all together looking happy and having a good time. And after all, Emma may have been the one to introduce May to Boyd. Could it be that Emma, after being engaged and planning a wedding for a lengthy two years, was offended that May would not only get engaged just a few months before her wedding, but also plan to marry before Emma? May and Boyd quickly married on September 17, 1913, less than four months after their announcement, and a mere two months before Emma was married to Harold on November 11. If you're thinking that May and Boyd married so quickly because maybe she was pregnant, there's no evidence of that. Their first recorded child wasn't born until August 3, 1914, nearly 11 months after their wedding night. Although it's possible May had a miscarriage not long after the wedding, and then quickly conceived again in what would have to be November, we can't assume that's what happened.

Whatever the reason for May fast-tracking her wedding, Emma absolutely might have felt that May was stealing her limelight by marrying so soon before her own wedding. Even today, there are women who would be upset about that, but particularly during a time of such formality and propriety, it could have been viewed as May upstaging her friend. There were social rules to be followed and this was definitely a bit of a slap in the face of etiquette.

Emma's name is notably absent from May's wedding announcement in September. Although it doesn't mention the wedding party by name, it does name some of the guests who attended, and Emma is not among them. A week before Emma's wedding, she spent the weekend at the house of Florence Fretz in Bucks County, another long-time friend who also happened to be Harold's cousin. I imagine this was likely Emma's bridal shower since Florence was the one to serve as Emma's Maid of Honor. By the time Emma's wedding is announced in the paper, there is no mention of May among any of the guests or bridal party.

To my knowledge, the two never reconciled. May would go on to have two children with Boyd and moved all around Pennsylvania over the years. Emma and Harold also had two children and stayed in the Philadelphia suburbs. Maybe starting their own families and living in different places, they might have gradually drifted apart anyway, but it seems like such a shame that they never even kept in touch by letter, or introduced their children. While I can understand Emma feeling upstaged by her friend, it feels like a forgivable offense to me, and I would never begrudge a friend the happiness of her wedding, whatever the timing.


Emma quit teaching full time after her marriage, as was typical of the times, but she did periodically substitute, and was active in her community and even politics. In 1938, she was the Secretary of Springfield-Whitemarsh League of Women Voters, and throughout the 1940s, she was first the Corresponding Secretary and eventually President of Eastern Montgomery County Council of Republican Women, as well as a representative of Wyndmoor Service Organization (a group that supported their local soldiers in the WWII armed forces, such as by sending care packages). She died December 18, 1954.

May's married life is less detailed, and it's unclear how her split with Emma effected their husbands, who were equally good friends with each other. Did they keep in touch, or did they side with their wives and never speak to each other again? The glimpses we get of our ancestor's lives are never enough, and always leave me with more questions that will probably never be answered. 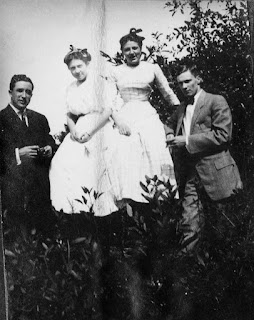 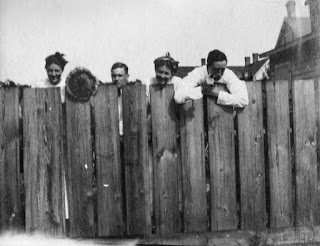 Posted by History Chick at 1:22 PM No comments: