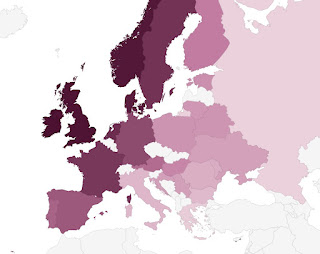 I know for many people like myself who are visual people, seeing a map of where exactly each region covers can be really beneficial to understanding your Gedmatch Admixture results. There's already some official European maps available for Eurogenes EUtest V2 K15 from the Eurogenes blog, and you can sometimes find some unofficial ones for other calculators, but I haven't seen any for Eurogenes K13, so I gave it my best shot.

Anyone can make these maps with the right tools - the data is readily available from the Population Spreadsheets for each calculator. The difficult part is that the tool I used to create the map was in Google Spreadsheets Charts, which only recognizes modern country names. So I had to categorize every specific population into a modern country. Not easy considering many countries included several populations (I simply averaged them) and many of the populations span several countries (I just put the data in all relevant countries). But still, it wasn't easy, so it's safe to say these are very much unofficial maps, not endorsed by the Eurogenes creator. They are interactive, so hover over each region for the percentage. If anyone can recommend a better free mapping program, please let me know!
K13 North Atlantic Map - essentially a "Northwest Europe" region primarily including British Isles, Scandinavia, and Germanic Europe, though as you can see, it also includes most of Europe to some degree.
K13 Baltic Map - primarily the Baltic States (though data is missing for Latvia) and surrounding areas, though again, you can see most of Europe is included to some degree.
K13 West Med Map - primarily areas that border the western portion of the Mediterranean Sea (both Europe and North Africa), also including the eastern portion of the Mediterranean area to a lesser degree.
K13 West Asian Map - peaks in the Caucasus region, includes surrounding areas (does not include all of Russia, there's just no way to break down the maps more).
K13 East Med Map - primarily areas bordering the eastern portion of the Mediterranean Sea (leaning more heavily to the North African and Middle Eastern areas), though it appears to peak in Yemen, that's due to the Yemen Jewish sample getting the highest results in this category.
K13 Red Sea Map - mainly be areas bordering the Red Sea, though data in some African areas is missing, it peaks in the Arabian Peninsula and Horn of Africa, yet also includes all of North African to some degree.
K13 South Asian Map - peaks in India, Bangladesh, Nepal, and Pakistan, including surrounding areas in varying degrees.
K13 East Asian Map -coming soon.
K13 Siberian Map - coming soon.
K13 Amerindian Map - coming soon.
K13 Oceanian Map - coming soon.
K13 Northeast African Map - coming soon.
K13 Sub-Saharan Map - the area south of the Saharan desert, peaking in West Africa and Bantu regions, but also covering parts of North Africa to a much lesser degree. Data for some areas is missing.

I also created charts showing what percentage each sample population got for each region, so you can get an idea of what each region includes even for the areas I haven't done maps for yet:
K13 Population Chart (by population)
K13 Reverse Population Chart (by region)
Despite having done all this, I do want to clarify that Gedmatch's Admixture calculators have not been updated in many years, and the reference panels used for them are very small in comparison to the consumer testing companies, so you should definitely take the results with a large grain of salt.
Posted by History Chick at 10:55 AM No comments: