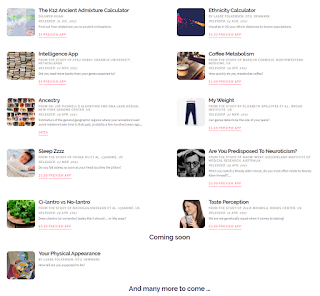 GenePlaza is a third party website that allows you to upload your raw DNA data from testing companies including 23andMe and AncestryDNA, and provides you with different DNA reports, for small fees.

It offers some ethnicity reports, and some traits, and nutritional reports. To the left you can see a screenshot of all the "apps" or reports they offer and how much they each cost. The upload of your DNA is free, and they even provide you with $3 credit for uploading, which will buy you at least one app/report - so you get at least one for free. Not a bad deal, and the other apps aren't very expensive either, ranging from $1-5.

However, it doesn't provide a true health report with disease risks, only "traits" like Intelligence, Sleep, Taste. etc. The apps for Neuroticism and Weight are probably the closest to health reports and may be of use to some people, but there are other sites that will provide a much more comprehensive health report. On GenePlaza, they tell you whether you're likely to be predisposed to each condition or not, including a chart on how your results compare with other GenePlaza users.

Of the three ethnicity options, the "Ancestry" app is likely the one most people are looking for. The K12 Ancient Admixture Calculator only reports on prehistoric populations like Hunter-Gatherer or Farmer. While it can be interesting, most people are looking for their more recent admixture report. There's two of those: "Ethnicity Calculator" and "Ancestry". The Ethnicity Calculator is simply a plot chart. It works by providing a chart showing the different populations included and how closely or distantly they relate to each other (the closer the dots on the chart, the more closely they are to one another) and then showing you where on the plot chart your DNA fits in the best. It does not provide any percentages for each population you match, which is what most people are looking for.

That brings us to the "Ancestry" app, shown below. It costs $1.89, meaning you can get it for free with the $3 credit they give you for uploading. This will provide a report much like you received with the company you tested with, percentages and all. However, the regions included are broad, for example, I got 55.7% Northwest European, 27.6% Southwest European, 15.2% Ambiguous West Eurasian, and 1.5% Ambiguous. According to GenePlaza, Ambiguous "indicates a percentage of your DNA file that did not match with any of the sources in our reference panel." So it means 1.5% of my DNA didn't match any of their samples, and 15.2% of my DNA couldn't be narrowed down further than "West Eurasian".

For me, this is fairly accurate, if not very specific. My tree is 25% Southern European (Southern Italian/Sicilian), and 75% Northern European (British, German, and Norwegian). If you add the Ambiguous results to Northwest European, that's almost exactly consistent with my tree. However, it conflicts with most other DNA ethnicity reports. 23andMe, AncestryDNA, and FamilyTreeDNA, all seem to agree I'm more like 62-64% Northern European and 36-38% Southern. Take from that what you may, keeping in mind all ethnicity reports are an estimate.

You'll note there is an option to expand my results for Northwest and Southwest European. This provides details on the more specific populations I matched from those regions, but it does not provide a percentage for these groups. For Northwest European, it says I most closely match populations from Argyll Bute (an area of Scotland), England, Norway, and Orkney Islands (off the Northern coast of Scotland). This is fairly consistent with my tree - my British roots are indeed Scottish and English, though I don't know where in Scotland so I can't confirm Argyll Bute and Orkney Islands, but the interesting this about this is I often get Orkney results in Oracle too (see here for details on what Oracle is). The only thing this break down is missing is my German roots.

My break down for Southwestern European is a little farther off the mark. They seem to think I most closely match Basque, South France, and Spain but obviously this is actually my Italian DNA.

NOTE: There has since been added a four ethnicity calculator called K25 Admixture Calculator, which means it includes 25 categories, some of which are very specific regions. I have not tested it yet for accuracy but it looks very interesting. It costs $5. Worth noting is that it has 3 categories for Native American, but none for Jewish.

Conclusion: Easy to use and explains everything in plain English, doesn't include much of the technical data in the background. Report options are few, but you can at least get your ethnicity break down for free and the other apps aren't expensive. Each app has an example preview showing you what you'll get if you purchase it, so you can decide whether it's worth it or not. For the free ethnicity report, it's worth checking it out, but the purchase of the other apps may not be worth the cost. Although they are inexpensive, there are other options that will provide more reports for a similar cost or even for free. See a list of upload options for your DNA here.
Posted by History Chick at 6:00 AM