How to get the AncestryDNA Ethnicity Report Update (Beta)

Many of you may have noticed a lot of talk about the update in the works for AncestryDNA's ethnicity estimate. Some of you may have already received it. It is currently still in beta testing, which means only certain tests are included and Ancestry are still tweaking it based on the feedback they're getting. We are at Ancestry's mercy for who gets updated and when.

Or are we? Here's a secret, shhh: many of you may be able to "force" the update. It apparently doesn't work on all tests (at first I thought it only worked on tests from the V1 chip, since both my kits on V2 didn't work, but then I got feedback it was the opposite for some people), but it doesn't hurt to try.

Open your ethnicity estimate or "DNA Story" page. In the URL bar, remove everything in the URL after the "code", the long string of numbers and capital letters. Once you've removed all that, it should look like this (with a different code, of course - this is mine and shouldn't work for you since you're not logged into my account - at least, you shouldn't be!):

Now, at the end of the URL, add "/transition" (without the quotation marks, of course). So now it looks like this:

This will generate a survey on your expectations of your ethnicity report. When the survey is complete, you'll be able to see a preview of your new, updated ethnicity report and a comparison with what it previously was. You won't be able to click any of the categories or regions to see the details, but scroll down and below all that you will find a button that says "Keep Update". If you're happy with the update, you can click this button and your report will be officially and permanently updated, and then you can click on the groups to see more details (and your previous results will still be visible if you click "Up to date" but not in as much detail).

Like I say, it does not work for everyone. 2 out of my 5 kits showed completely blank results at the end of the survey (nothing on the map, and only previous results listed on the side - show above) and clicking on "Keep Update" did nothing (the spinning circle just kept spinning). 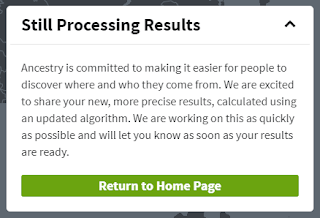 In a couple days, I will be detailing my own results and exploring whether the update was worth it or not.

UPDATE 08/22/2018: AncestryDNA have now added a message saying "Still processing results" for kits that the transition option doesn't work on. It's unclear whether they are actually processing them or whether they've just tossed this message up to appease people, or when the update will ever be available for them.

UPDATE 08/24/2018: It's become clear that AncestryDNA have shut this loophole down completely and anyone who wasn't able to access it and click "keep update" beforehand is now getting this "still processing" message. According to a statement they made on Facebook: "That process was not an official way to get the updated regions." Makes you wonder how it was even accessible to begin with if that's the case. Anyway, in the same statement, they say "If you haven't received the DNA ethnicity update yet, you should receive it very soon!" Considering it took them about 3 years to bring the Family Group Sheets back like they promised, I'm betting "very soon" means something different to them than it will to most users.
Posted by History Chick at 7:17 PM