Breaking Down Brick Walls with DNA

I'm going to detail one example of how DNA helped me break down a brick wall in my tree. This may be a somewhat unique case that might not always apply to every situation, but it's still worth detailing so people can get an understanding of how to work with your DNA matches in general.

My 4th great grandmother was Hope Gibbs, b. November 3, 1805 in Philadelphia. I knew from her baptism record that her parents names were Caleb and Isabella (maiden name unknown), but I didn't know anything else about them. My grandmother had left notes with the names and some details of Hope's sisters, and indeed, research of some of them not only confirmed those details but also listed Caleb and Isabella as their parents, but still no details on those parents. I even found some DNA matches who were descended from those sisters, but none of those matches knew more about their parents.

I then found a marriage record of a Caleb Gibbs and Isabella Brannin in 1799, in Mt Holly, Burlington, NJ (Ancestry.com wrongly transcribed the location as Philadelphia), but given the difference of location, how could I know it was the right couple I was looking for? Further research on the couple married in 1799 revealed they were Quakers, and Isabella was the daughter of Barzillai Brannin/Branin, and the granddaughter of Michael Brannin/Branin, but I still was unsure about the connection to Hope Gibbs. Were these really her parents?

It took me a while to think of this for some reason, but I eventually decided to look for the surname Brannin in my DNA matches (well, my mom's DNA matches, since she is one generation closer to the ancestors in question). Theoretically, I figured if my Isabella was a Brannin, I (or my mom) would have DNA matches with people descended from her father or grandfather, I just hoped Brannin wasn't so common of a name that I got unrelated hits for it among my matches. It would be much more difficult if the name was something like Smith, and indeed, I had previously tried to search my DNA matches for the Gibbs surname, hoping to find people who descended from a father or grandfather of Caleb, but Gibbs was too common of a name and I was getting results for DNA matches with obviously unrelated Gibbs ancestors due to their location or time period (my DNA relation to these matches obviously lies elsewhere and the Gibbs surname is just a coincidence).

But the results and conclusions of the Brannin surname search were almost instantaneous - I quickly found 10 DNA matches descended from either Barzillai or Michael Brannin (two shown above), which would only be likely if I was descended from or at least related to them genetically. Not all recurring ancestors among your DNA matches will be your ancestors, some may be related to you in other ways, but combined with the existing question of whether my Isabella was Barzillai's daughter, the DNA matches conclude that the two Isabella's were indeed the same. Worth noting is the fact that two of the ten matches shared a segment with my mom of over 14 cM, which has over a 99% chance of being identical by descent, so these are not false positive matches. Also worth noting is the fact that some of the ten matches I found I had to uncover myself because their trees didn't go back far enough, but with a little digging, I expanded on their tree and trace their Brannin line back to Barzillai or Michael. Sometimes, you have to do a little of the legwork yourself. 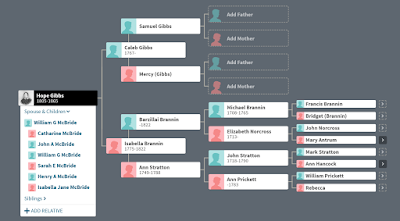 Quakers are good record keepers, so confirming Isabella's identity was a huge breakthrough for me, and I then spend the next few days building this new branch of my tree, going back several more generations on both her paternal and maternal sides, something I couldn't have been sure of if I hadn't found the DNA connection. Of course, this also confirmed Caleb's identity as the man who married her, but unfortunately the Quaker records didn't go back as far for his ancestry. It at least confirmed his parents as Samuel Gibbs and Mercy (maiden name unknown).

By the way, if you're wondering about the notes showing simultaneously with both DNA matches in the screenshot above, that is with the use of Chrome extension MedBetterDNA. It allows you to always display notes so you can refer to them quicker and easier. It also has a lot of other useful tools, like the the hashtag option, which you'll see I'm also making use of - it lets you search your matches by hashtags in the notes field, so you can more quickly find the matches you're looking for. You may also notice the emoji icons I'm using - the green check mark and the black heart. There's no hidden meaning to the black heart, I'm just using it as a quick visual reference for that particular branch of my tree. Every one of my 2nd great grandparents gets a unique icon for their branch and I was running out of heart colors - that may seem excessive with 16 second great grandparents but it's working for me. The green check mark denotes matches with whom I've identified our most recent common ancestor. As a visual person (I am a photographer, after all), I just find the icons help my brain sort my matches. For non-windows users, you can also make use of flag emojis (the flags don't work on Windows for some reason) to identify matches with a MRCA from a known country.

I hope this helps illustrate how you can use your DNA matches to confirm questionable branches like this. Keep in mind that the further back the ancestors you're looking for are on your tree, the less likely you'll be able to reliably use or find identical by descent DNA matches descended from those ancestors. In this case, we were looking at my mom's 5th or 6th great grandparents, meaning she'd be around 6th or 7th cousins with those DNA matches, which is still within the realms of identical by descent.
Posted by History Chick at 2:08 PM