MyHeritage is generally known for not having the most reliable ethnicity results. This is probably because they were latecomers to the DNA field, and they haven't yet updated their percentage reports. But of course, all ethnicity percentages are merely an interpretation of our DNA, and not necessarily very reliable anyway. And what MyHeritage does do a great job of (unlike AncestryDNA), is showing us lots of data on all the genetic overlap among neighboring regions, so we can understand how it works. Not only do they show us all available regions and the areas they cover (below), but they have a section called "Ethnicity Maps" that shows us "the most common ethnicities in each country and the top countries for each ethnicity, according to MyHeritage DNA users' data." Although this is all based on data from MyHeritage, it's still a valuable learning tool for understanding admixture in general. 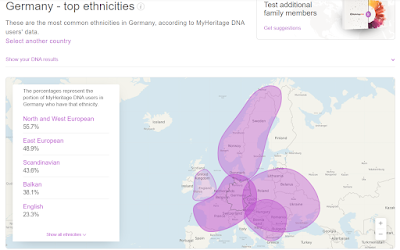 For example, looking at the data by country, if you click on Germany, you'll see 55.7% of people living in Germany get results in the "North and West European" ethnicity (above). We don't know what average percentage they get for "North and West European" because the data doesn't include that, but it's probably pretty high. It then goes on to list another 19 ethnicities down to 1.2%, from all over Europe, Asia, Africa, and even Native America. That is not all due to genetic overlap, but simply because there may be, for example, a few Asians living in Germany who took the test. For genetic overlap, it's probably best to look at the top 5 ethnicities - which is likely why their default view is the top 5. What that shows us is that lots of people in Germany also get results in East European (48.9% of testers), Scandinavian (43.6%), Balkan (38.1%), and English (23.3%), illustrating the strong genetic overlap Germany has with those nearby areas. That means if you have known German ancestry, it would not be uncommon to get results in any of those neighboring regions, especially (though not exclusively) from MyHeritage's results. 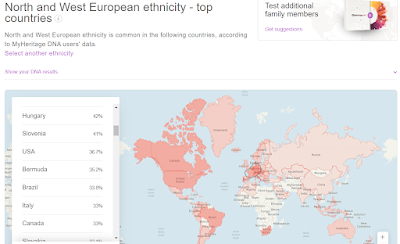 On the flip side, when you look at the Ethnicity Maps by ethnicity, it shows us the most common countries each ethnicity is found in. This gives us a good understanding of two things: the top 5-10 countries show us the areas covered by that category (although our own Ethnicity Estimate already gives us that, this can give us an understanding of just how broad that area could really be), and the full list of countries shows us how much emigration there's been from each country around the rest of the world. For example, 36.7% of people in the USA get results in North and West European, which is not surprising, considering how many German immigrants there have been to the USA over history. This doesn't really show us genetic overlap, but it is very useful for understanding modern migration patterns.
Hopefully, as MyHeritage update their ethnicity reports, they will also update this very useful data and not retire it like AncestryDNA keep doing.
Posted by History Chick at 3:07 PM