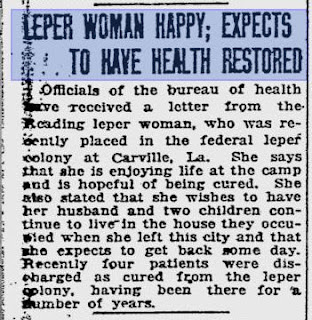 When we think of leper colonies, we tend to think of medieval times but actually, there was no effective treatment for Leprosy until the 1940s and leper colonies were still in use well into the 20th century. The clipping to the right is from March 15, 1925 in which a woman who was infected with Mycobacterium leprae moved from Reading, PA to a federal leper colony in Carville, LA. Though the article says she remains hopeful of a cure, she probably didn't recover for another 20 years, if she lived that long. Though leprosy isn't fatal, we don't know how old she was at the time.

Although leprosy is very treatable today and only effects about 5% of people who come into contact with it anyway, much like many diseases, it can still be found untreated in underdeveloped countries.

Posted by History Chick at 6:31 AM