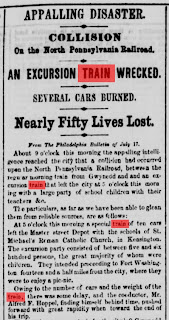 The partial article to the left is a clipping from the New York Daily Tribune on July 18, 1856, which had been printed in the Philadelphia Bulletin the day before. You can read the full article for free from the Library of Congress and you can read more about the Great Train Wreck of 1856 on Wikipedia.
Posted by History Chick at 11:07 AM