Breaking Down More Brick Walls with DNA and ThruLines 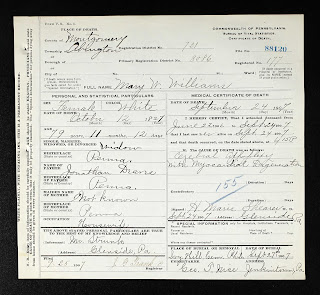 Previously, I detailed how I broke down one brick wall with the aid of my DNA matches, involving a suspected maiden name. This time, I'm going to detail how it helped me prove that my ancestor Jonathan Deaves was the son of Isaac Deaves.

My 3rd great grandmother, Mary W Deaves was always a huge brick wall in my tree. When I first got into genealogy, I started out where my grandmother had left off with her research. She did not even have Mary's maiden name. I was able to find Mary's death record (shown left) which said her father's name was Jonathan Deaves. That at least gave me her maiden name, and her father's name, but there was no mother's name and for years I was not able to find out anything more about her father. I had no idea when he was born or died, though I assumed it was probably somewhere in or around Philadelphia since that's where his daughter lived. I had no idea who he married or when or where, or who his parents might have been. By the time of the 1850 census, Mary was already married and I couldn't narrow down any Jonathan or Jon/John Deaves, Daves, or even Davis in census records as conclusively the one I was looking for. So I'd made a little headway but I was stuck again, just like my grandmother had been.

Deaves seemed like a fairly unique name, although it is also written as Daves or Davis sometimes, which are very common, but I thought I'd give my DNA matches a search for the more unique spelling. Three matches showed up, and they were all descended from an Isaac Deaves or his father, Thomas Deaves. Looking into the records, Isaac Deaves did indeed have a son named Jonathan (named in Isaac's will) but how could I be sure he was the Jonathan Deaves I was looking for? The location was right but the will didn't mention any of Jonathan's children, or any other information about him (though even if it had, I had no other info on my Jonathan so how could I confirm it?). I couldn't find any other records to help confirm it either and I thought three matches were a good lead, but not conclusive. It didn't seem like quite enough, especially since I couldn't find anyone descended from Jonathan himself. 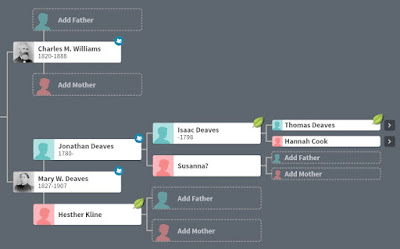 Then ThruLines happened. And suddenly, it was finding connections I hadn't been able to find. It's showing Isaac Deaves as a potential ancestor! I look again, and I (and my mom, who is one generation closer) now have six matches descended from Isaac, one from Jonathan, and three from Thomas for a total of ten, most of whom also matched each other (an important factor) and most of whom share a 15+ cM segment with me or my mom (meaning they are definitely identical by descent). I carefully went through each one and confirmed their descent from these men - it doesn't mean much to have this many matches to one branch if there's an error somewhere and most or none of them are actually descended from these ancestors. But once you do have this many numbers, it becomes less likely they each have an error, especially when they are descended from different generations in the same line because that means they can't have all just copied the same error. 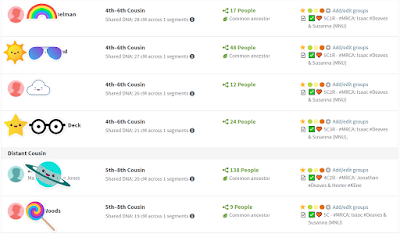 Interestingly, I also have one other DNA match who is descended from a Deaves family in Glouchestershire, England, which is supposedly where Thomas's father was from (another Isaac), but I haven't been able to confirm this yet and with only one match, I can't confirm it with DNA. Hopefully with more research (either on the paper trail or with DNA), I can confirm or disprove it eventually. For now, I'm very happy with my breakthrough.

Posted by History Chick at 8:46 AM