FTDNA have jumped on board the update wagon, and a few months ago, released myOrigins 3.0. They've broken down some regions into more specific locations, but not a huge amount and of course, they still find it impossible to accurately tell apart the British Isles, Scandinavia, and Germanic trifecta (though that's not unusual for most companies).

Here's my result history with FTDNA: 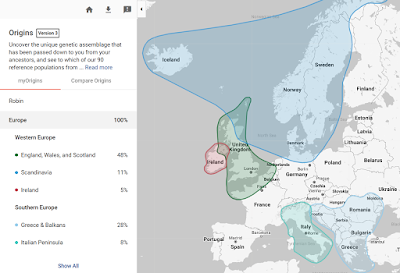 With Version 3, they've wrongly put most of my Italian ancestry into Greece, whereas most other companies are able to tell the difference better than this (I usually only get trace amounts in Greece, if anything, except at MyHeritage). Added up, it still equals about 36% Southern European though, which isn't far off the mark (should be about 32%).
And as noted, I have no results for Germanic now (previously West/Central Europe, now simply called Central Europe), when I should have around 20-25%. That means my British results (England, Wales, & Scotland) are somewhat inflated. Scandinavia is consistent with my tree though, since I had one Norwegian great grandparent. And they've finally managed to get rid of the trace amounts in unlikely locations (like Finland and Middle East). Considering it's common for companies to not be able to tell British from Germanic, the results aren't entirely off base. 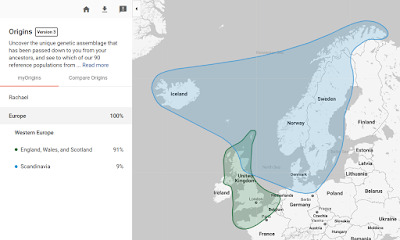 My mom's kit probably saw the biggest change (she did not test early enough for Version 1):
myOrigins 2.0:
Scandinavia 42%
British Isles 35%
East Europe 18%
Southeast Europe 3%
East Middle East < 2%
West Middle East < 2%
myOrigins 3.0:
England, Wales, & Scotland 91%
Scandinavia 9%
My mom's tree is also about 20-25% Germanic so the lack of any results in that area yet again seems to suggest their results lean towards Britain instead. Likewise, her Scandinavian results went from one extreme to another and most of it went to Britain. She had one Norwegian grandparent, so should be about 25% Scandinavian. The fact that they can't get this anywhere near close suggests my Scandinavian results being fairly accurate might just be a coincidence.
Although they managed to eliminate the trace results in inconsistent locations like Southeast Europe and Middle East, and also removed the high percentage in East Europe where my mom has no ancestry, I'm not sure I'd say the update is a huge improvement for my mom. 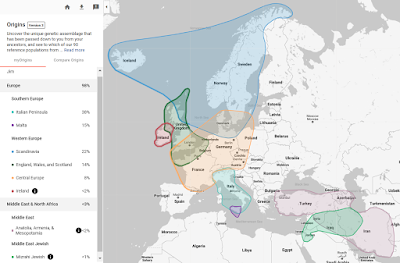 My dad's results (again, no Version 1):
myOrigins 2.0:
West and Central Europe 65%
Southeast Europe 8%
Asia Minor 22%
East Middle East < 2%
North Africa < 1%
Scandinavia < 2%
West Middle East < 2%
myOrigins 3.0:
Italian Peninsula 38%
Malta & Sicily 15%
Scandinavia 22%
England, Wales, & Scotland 14%
Central Europe 8%
Ireland <2%
Anatolia, Armenia, & Mesopotamia <2%
They've at least managed to correctly put his Italian ancestry in Italy instead of Greece! My dad is half Italian (Southern Italian), and his results add up to 53%, so that's very close. However, I don't know where that Anatolia, Armenia, & Mesopotamia is coming from - if it's from his Italian ancestry, that adds up to 55%, which is moving away from accurate. Additionally, his British ancestry should be about 20%, so 14% is not far off from that.
Unfortunately, it's downhill from there. My dad has no Scandinavian ancestry, so 22% is really high, but he does have a lot of German ancestry (about 30%), so only 8% in Central Europe is very low. I guess I should just be pleased he got any results in Central Europe at all, given that my mom and I don't! 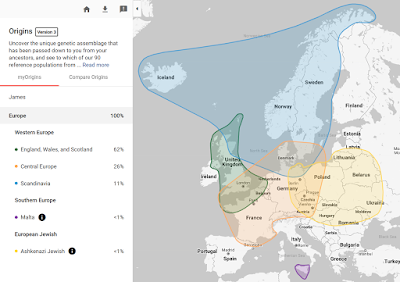 My paternal grandfather's results:
myOrigins 1.0:
Scandinavian 48%
Southern Europe 32%
British Isles 11%
Jewish Ashkenazi Diasporia 5%
Central Asia 4%
myOrigins 2.0:
West and Central Europe 84%
Scandinavia 8%
Asia Minor 7%
Ashkenazi < 2%
myOrigins 3.0:
England, Wales, & Scotland 62%
Central Europe 26%
Scandinavia 11%
Malta & Sicily <1%
Ashkenazi Jewish <1%
I really don't know why FTDNA insist on giving him Ashkenazi results when no other company does and has no known Jewish ancestry. His results really should be very straight forward - he's roughly 40% British and 60% German. And for the first time ever, FTDNA is giving him significant amounts in both Britain and Central Europe (usually it's one or the other), though if the numbers were swapped, it would be more consistent with his tree. 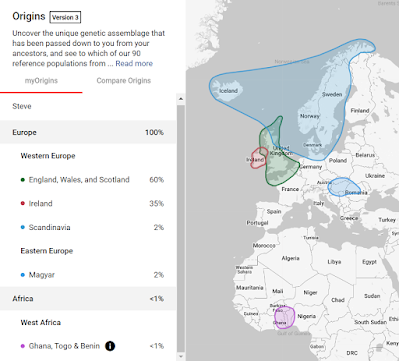 Finally, my husband's results:
myOrigins 2.0:
British Isles 97%
Ashkenazi < 2%
Northeast Asia < 1%
West Africa < 1%
Iberia < 1%
Oceania < 1%
myOrigins 3.0:
England, Wales, & Scotland 60%
Ireland 35%
Scandinavia 2%
Magyar 2%
Ghana, Togo & Benin <1%
My husband being a British native/citizen with no known ancestry outside the British Isles, if we dismiss the low results in Scandinavia, Magyar, and Ghana/Togo/Benin as noise, his results are probably the most consistent with his tree yet. He's basically half British and half Irish, so 60% British isn't too bad. Version 2 lumped them both together though, which meant 97% British Isles was probably even more accurate. This is a good example of how the broader the regions are, the more reliable they are.
Posted by History Chick at 6:23 PM