Is it Okay to Feel Ashamed of Our Ancestors?

This is a topic that comes up a lot in genealogy, so I'm going to say my peace about it here. I'm probably going to say some things that will make some people uncomfortable (because when I say them in social media, there are always people who get very angry), so if exploring our feelings about immoral things our ancestors did, like for example, owning slaves, or accusing someone of witchcraft, makes you uncomfortable, I suggest you stop reading now. 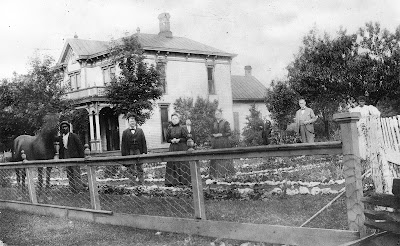 Above: A photo of my once-slave owning relatives alongside their black servants who were probably once slaves if they were old enough - this photo is from the 1890s. I also have ancestors who were slave holders but no photos of them alongside former slaves. Is it okay to feel ashamed of this photo and the relatives in it?

I'm not going to beat around the bush, I'm just going to say it: don't let people tell you your feelings are wrong if you feel ashamed of something an ancestor did that was really heinous.

I know what people will argue. "But it's not your fault! You had nothing to do with it! You're not responsible for your ancestors actions!"

Because let's flip things for a moment. Have you never once felt pride in something great, something positive that an ancestor did or accomplished? I'm pretty sure we all have - it's a large part of genealogy. We all feel some kind of ties or connections to our family history and our ancestors, because why else would we do this? Genealogy sort of loses all meaning if we don't feel some kind of connection to our ancestors. And if it's okay to feel pride in our ancestors through these ties we feel to them, why would we not also be allowed to feel ashamed of them when appropriate? Isn't it a little bit hypocritical to feel pride in our ancestors when they do something wonderful, but shrug it off with "nothing to do with me" when they do something terrible? Isn't it just a little too convenient to have the luxury to only claim a connection to the good stuff? And again, to be clear, that connection doesn't make you responsible.

Don't get me wrong, I'm not trying to shame people. I'm not saying anyone should feel ashamed - certainly not of themselves. I just think people who do feel ashamed of an ancestor or relative shouldn't be insulted, mocked, told they are wrong, or given a hard time for it in any way, and yet this something I see a lot whenever the topic comes up. On the contrary, I think people who are able to explore those feelings, and understand they can feel ashamed of an ancestor without being personally responsible for their actions, are very emotionally mature and intelligent. It seems to me that people who can't accept that dual reality are uncomfortable with something their ancestors did and instead of processing that emotion, they just shut it down. The fact that other people are able to process it makes them doubly uncomfortable, and so they lash out. And if what I have to say about that makes some people angry, that kind of just proves my point.

Just let people feel whatever they feel. It doesn't mean they're consumed with guilt, it doesn't mean they can't still enjoy genealogy. Ultimately, it's not anyone's place to tell anyone else how they should or shouldn't feel.

So yes, it is okay to feel ashamed of something an ancestor did, just like it's okay to feel proud of something an ancestor did. It can even be the same ancestor you can feel both ashamed and proud of at the same time. Human beings have the emotional complexity for both those feelings to exist at the same time. That doesn't mean you should or have to feel ashamed of an ancestor, but it does mean when you come across someone who does, just respect their feelings because they're not wrong to feel that way.

Email ThisBlogThis!Share to TwitterShare to FacebookShare to Pinterest
Labels: musings